March 6, 2018 – Hollywood was the site of the most glamorous night of the year on March 4th at the 90th Academy Awards ceremony at the posh Dolby Theater as the Academy of Motion Picture Arts and Sciences presented its annual awards show, better known as the Oscars, to honor the best films, actors, producers, directors, songs, and my favorite category: the costume designers.

In my research on the Oscar statuette’s facts, I learned that the 24-karat gold plated statuette, designed in 1928 by an MGM Studio art director named Cedric Gibbons, and sculpted by George Stanley, is thirteen and a half inches in height and weighs eight and a half pounds. Interestingly enough, I noticed that the Oscar statuette of the knight holding a crusader’s sword is standing on a reel of the film with an inscription which signifies only five original branches of the Academy: actors, directors, producers, technicians, and writers, but does not mention the costume designers.

“Why costume designers? You may ask me. Well, I am glad you did. The costume designers express their gratitude without getting into the prolonged and irritating comments on politics du jour. As a matter of fact new this year: Jimmy Kimmel, the show’s host has offered a special gift of the slinky and shiny Jet Skis new ultra chic set, valued at $17,999 for the shortest acceptance speech. And guess who won? Mark Bridges, this year’s costume designer winner.

As a movies action unfolds, the visual effects of the costumes bring the script’s interpretation to life on the big screen, while reflecting the history and the fashions of the era they depict. In creating wardrobes, the designer considers color, shape, fabric, fit, and fashion history. However, unlike fashion designers, costume designers create looks that suit specific events and characters.

Since this is one of my favorite awards of the evening and in my view no Oscar ceremony would be complete without the most coveted award for the best in costumes, let’s review the five Oscar-nominated costume designers who captivate the movie goers with their exquisite costume creations which reflect the culture and the historic era depicted in each of the movies they worked on.

This year the intimate creative collaboration among great filmmakers, actors, and costume designers is expressed vividly in the five movies nominated for the 2018 Oscar in the category of the costume designs. 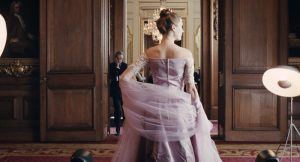 The drama is set in the glamour of the 1950’s post-war London, where Bridges captured and centered on the couture costumes in period flavor of 50th London. Bridges made close to fifty garments for “Phantom Thread” with his team traveling far and wide for fabrics, sourcing them from suppliers in Rome, Paris, Los Angeles, New York, but especially for the woolens, which came from the U.K. 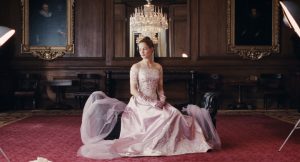 They went to the Victoria and Albert Museum and examined their work to get the flavors of London at that time. Mark graciously accepted his 2018 Oscar for “Phantom Thread” and expressed his gratitude in his shortest of the night acceptance speech: “Thank you Paul Thomas Anderson for writing an amazing script and having me design it.

Thanks to the wonderful actors Daniel Day Lewis, Vicky Krieps, Lesley Manville and the entire company of actors who were such great collaborators on this film. And thanks to my brilliant crew in London who worked tirelessly to make beautiful dresses and get them on camera.” This is Mark Bridge’s second Oscar. He previously won an Oscar for designing costumes for “The Artist” the 2012 Oscar winning movie.

Helped by the incredible acting by Gary Oldman who won the 2018 Oscar for his portrayal of the legendary Prime Minister Winston Churchill, the film tells the thrilling and inspiring true story that began at the precipice on the World War 2 when Sir Winston Churchill must decide between negotiating a peace treaty with Hitler and Nazi Germany or standing his ground on his firm ideas of liberty and freedom. And you know the rest of the story, I am sure.

Designing costumes for this extra ordinary film by the British Costume Designer, Jacqueline Durran, who is Joe Wright’s a go-to costume designer for all of his films, required an expert aficionado on period films and nobody does it better than Durran. Her costumes are among the elements that helped actor Gary Oldman unleash his most phenomenal performance. Designing around the prosthetics Gary Oldman wore in order to fit into the Churchill’s physique’s image created the template for making the most fitting suits to look natural. 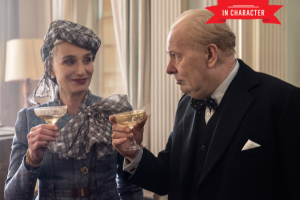 “The prosthetics came first and then I build the costumes around it” says Durran. “The process of capturing the clothes of the working class from that era involved looking through hundreds of photos of Britain at war. I looked how people wore their clothes, how people wore their hats in order for me to create the costumes you see depicted in “The Hardest Hour.” It comes down to the fact that you are building a world for the actors and the director to project their vision for this film” comments Durran. This is the sixth Academy Award nomination for Ms. Durran. She has previously won an Oscar for “Anna Karenina”(2013)

“The Shape of Water”

In a recent TV interview with Luis Sequeira, the nominated for Oscar costume desgner and the winner of the 2017 Costume Designer Guild Award, shared some of his backgroud info on working on “The Shape of Water”: “I cretaed an aquatic-looking wardrobe for “The Shape of Water,” an adult fairy tale about a beautiful love story between Elisa, a mute government lab custodian with the Amphibian Man. The costumes consisted of a green and turquoise lab uniform along with complimentary attire in her personal life (not to mention a collection of vintage shoes for her toe-tapping fun. It’s a weird “Twighlight Zone” world of reality and fable dominated by the aquatic blue and green. It was an iconic look that comlimented this production design rather than a costume cavalvade.”

In response to Jimmy Kimmel’s opening monologue where the comedian jocked that ”The men screwed up this year, so the women started dating fish” Segueira respondeed with “Keep on dreaming about your monsters, Guillermo!” refering to Guillermo del Toro, the 2018 Oscar winner for the best movie “The Shape of Water.” This is the first Academy Award nomination for Luis Sequeira. 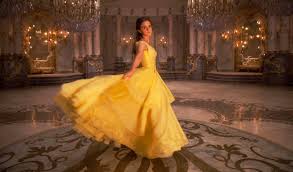 “Beauty and the Beast”

The beloved story and characters familiar to all who read and see in this Walt Disney Picture this movie celebrates one of the most beloved tales ever told. The stunning costumes by the famous designer Jacqueline Durran help tell the story of an updated romance between Belle and the Beast by giving it an 18th century French inspired versions of their attire, including the iconic “yellow ball” gown. To create the costumes Durran wanted to bring the feeling of history without reinventing the classic animation strongly loved by everyone.”When I was looking at fabrics and thinking of how the villagers and those other characters would look like, I searched for the look of the 18th century French prints and bring them with a twist into our Disney “Beauty and the Beast” world.

By adding elements taken from history we enriched the movie’s images and in particular helping lead character actress Emma Watson’s movements to be beautiful for the ball and in addition to match the yellow color to the original yellow dress in the animated version as it was an important link. The transformation of the Beast to Prince presented some challenges in creating our costumes for Dan Stevens in the role of the Beast, but as the story evolved, so did our designs. The designs of our costumes are completely based on the characters and the actor.”

Durran prefers not designing costumes for a story; she designs costumes for a character. ”The image of the design is often a result of reading the script and deciding what this character will wear.” This is the sixth Academy Award nomination for Ms. Durran. She has previously won an Oscar for ‘’Anna Karenina’’ (2013). 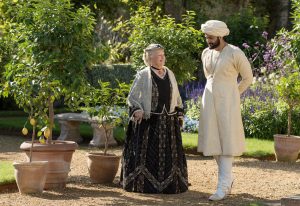 Celebrating Queen Victoria’s golden jubilee brings invited and sometimes uninvited guests including a young Abdul Karim who arrives from the British ruled India. The young clerk is surprised to find favor with the queen herself and their friendship creates a devoted alliance that her household and inner circle tries to destroy. The movie is not completely based on historic facts, but it is worth the price of admission just to see Dame Judi Dench act as well as travel through the beautiful English country site and observe the colorful costumes designed by Consolata Boyle.

The two-time Oscar nominated Consolata Boyle was born in Dublin, Ireland She is a costume designer and producer, known for her work for “Florence Foster Jenkins” (2016), “The Queen”(2006), “The Iron Lady”(2011) and “Philomena”(2013) films. Boyle challenged herself to create intricate, historically inspired garments that pay tribute to Queen Victoria’s legacy.

“The very word Victorian gave her name to that whole period, which resonates with darkness. So there is a lot of black color around Victoria’s life. But as her relationship with Abdul develops I was able to creep in elements of color: black-brown, grey-black, and white on black. I was able to utilize the aura of the Victorian period with heavy decorated, embossed, textured costumes of that period.”

In conclusion: “What we do is a cross between magic and camouflage,” said Edith Head (1924–1981), the most decorated award winner with a record of eight Oscars for costume design, as quoted in an article for Entertainment Weekly’s Oscar guide. “We ask the public to believe that every time they see an actress or actor that they are a different person.”

See you at the movies…