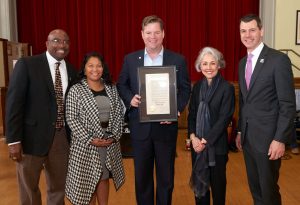 Tuesday, April 25, San Francisco Symphony President Sakurako Fisher, San Francisco Symphony Executive Director Mark Hanson, San Francisco Mayor Mark Farrell, San Francisco Unified School District Superintendent Dr. Vincent Matthews, and an enthusiastic group of friends and leaders from City Hall and the Unified School District; parents, teachers and supporters of the Symphony; Symphony Board members; and members of the media joined together to celebrate the 30th anniversary of the San Francisco Symphony’s Adventures in Music (AIM) program. Presented in partnership with the SF Unified School District, AIM is the longest running and most comprehensive program of its kind in the country, providing free music education to every 1–5 grade student in every public elementary school in San Francisco.
The gathering at Sanchez Elementary School began with remarks by Sakurako Fisher, highlighting the remarkable partnership between the San Francisco Symphony and the SFUSD that led to the creation of Adventures in Music (AIM) in 1988. She then presented letters of congratulations sent to the Symphony by Senator Dianne Feinstein, Senator Kamala Harris, and Congresswoman Nancy Pelosi. Fisher concluded by stating, “Every time I see the AIM program in action, my hope in mankind is renewed and my commitment to art and music and culture in San Francisco is reignited. Nothing compares to seeing young minds expanding and growing.” 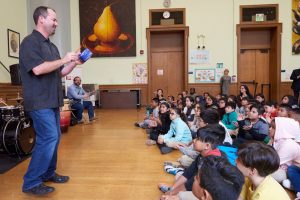 Mayor Farrell continued, presenting the Symphony with a City proclamation, naming April 24, 2018 “Adventures in Music Day” in the City and County of San Francisco. He remarked, “What is so valuable to me is that the Symphony really embraces the idea of inclusiveness, of making sure they educate everybody in the city of San Francisco. Students are not only able to have artists come here to their schools, which is amazing, but also to be able to go to the Symphony itself to hear and witness performances—that is enlightening. And the fact that this has happened now for 30 years in the city of San Francisco is just an amazing feat that I think we all need to celebrate. This is what it’s all about in San Francisco.”
Superintendent Matthews closed by highlighting the significance of AIM’s establishment in 1988, and sharing his own experience with the program, both as a public school teacher and as a principal. He shared, “There are two pieces that really stand out to me about the program: its equity and consistency. This program is one of the only arts programs that every single elementary student in our district has access to, and that is critical. The Symphony has been empowering our school district teachers for 30 years, and this is worth celebrating.” 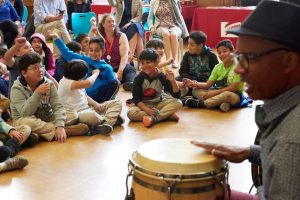