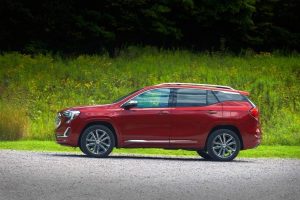 It’s about time GMC launched a new Terrain. The original hung around for nine model years and looked every bit its age by the time it was put out to pasture. As the slightly more luxurious cousin of the Chevrolet Equinox, the Terrain gets beefier exterior looks, exclusive cabin touches and unique technology features to set itself apart.

Step up to the range-topping Denali model and the differences between its Chevy counterpart are even more apparent, mostly in the way of extra chrome and more standard niceties. The problem, however, is that if you get too carried away checking option boxes, the Denali’s price tag can creep up to uncomfortable heights. In the case of my test car, that means an as-tested price of $44,370 for what’s essentially a nice-ish compact crossover.

Storage is certainly not a weak point in the Terrain’s game with nooks and crannies to stash stuff everywhere. There’s a massive center armrest compartment, door pockets and a slot on the passenger’s side of the dash sized perfectly to accommodate a phone. At the front of the center console sits a sizeable area to hold more belongings, opened up thanks to a new push-button transmission shifter at the bottom of the center stack. While the additional console space is nice, the shifter isn’t very intuitive, requiring a combination of pulling and pushing to select gears.

As the range-topping model, the Denali comes packed with a substantial technology. Taking care of infotainment is GMC’s IntelliLink system with an 8-inch touchscreen offering navigation, an OnStar 4G LTE Wi-Fi hotspot and Bluetooth.

It’s snappy and visually impressive with clean menu screens and handy hard buttons to easily get to desired screens.

Speaking of phones, IntelliLink also offers Apple CarPlay and Android Auto capabilities for the people who prefer hand infotainment management over to their smart devices. And to keep phones juiced up, the Denali can be equipped with a wireless charger. 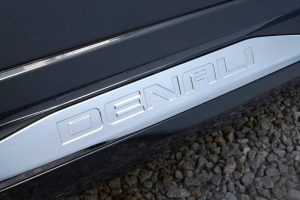 Elsewhere in the Terrain range, buyers can choose from a 1.5-liter turbo-four or a 1.6-liter diesel engine. But in the Denali, a 2.0-liter turbocharged four-cylinder offers 252 horsepower and 260 pound-feet of torque, easily scooting the all-wheel-drive Terrain off the line and up to speed to pass slower traffic on the expressway.

Midrange thrust is punchy with peak torque on tap between 2,500 and 4,500 rpm. The nine-speed automatic transmission happily goes about its business in most circumstances, but does hunt for the right gear at times when downshifting.

The drivetrain combo is estimated to return 21 mpg in the city and 26 mpg on the highway. During my week of mostly city driving — not to mention liberal use of the remote start feature during my wintry Michigan week — I observed 22.4 mpg, supporting the EPA’s figures.