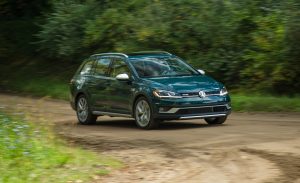 The Volkswagen Golf has long been one of our favorite cars, blending practicality with effortless athleticism and grace. What started in the mid-1970s as a single hatchback has grown into a lineup with more variations than are offered by some entire car companies. And with each new member of the family, we find ourselves newly impressed. The all-wheel-drive, wagonoid Alltrack, which first hit streets in the United States as a 2017 model, is no exception.

Essentially a lifted Golf SportWagen with beefier plastic exterior trim, the Alltrack very slightly expands the family and takes aim squarely between Subaru’s Crosstrek and Outback. Subaru’s faithful could teach Catholics a thing or two about devotion, but for those who can be convinced to look further afield, the Alltrack is an excellent alternative—a new flavor of granola, if you will.

The Alltrack was lightly tweaked for 2018. A refreshed front end, new headlights and taillights, and a new infotainment system make up the bulk of the changes. The new look is sharp and modern, and the available LED headlights are a definite aesthetic and functional improvement on last year’s standard halogen and optional bixenon bulbs.

Inside, on SE and SEL trim levels the new MIB II infotainment system stretches the 8.0-inch touchscreen to include the menu buttons that surround the display screen, with volume and tuning knobs representing the only topographic features. (Base S models get a 6.5-inch unit with physical buttons surrounding the screen.)

The new system looks better and is as ergonomically sound as the previous setup but feels laggy. Equipment has been shuffled among the trim levels, too, with active-safety equipment becoming standard across more of the lineup

This was the first time we’ve strapped our test equipment to a stick-shift Alltrack, and we were surprised to find that it’s significantly quicker than the automatic version. Zero to 60 mph happened in just 6.7 seconds, which is 0.8 second ahead of a 2017 Alltrack SEL automatic we tested. After a quarter-mile, the manual has a 0.6 second lead. This despite the 15 lb-ft of additional torque in the automatic cars.

Our Alltrack SE’s different wheel-and-tire package also turned in better results than the SEL, with the 205/55R-17 Falken Sincera 250A all-season tires pulling 0.86 g on the skidpad and helping the car stop from 70 mph in just 162 feet—that’s compared with 0.84 g and 172 feet for the wider, lower-profile 225/45R-18 Continental ProContact rubber installed on the SEL.

That tire size is a little odd, or at least not very popular, because the only winter-tire option available at our usual source, Tire Rack, was a Pirelli run-flat. Instead, we looked at Nokian’s line of Hakkapeliitta winter rubber and found that the R2, a tire that won our last winter-tire test, was available in that size. N