New York, May 18 (EFE).- NaturalizeNY, an initiative aiming to help eligible immigrants in New York state become U.S. citizens, has provided assistance to nearly 2,000 people since its launch in 2016.


The project, implemented by Gov. Andrew Cuomo, helps low-income immigrants cover the $750 application fee using funds from the State of New York in partnership with the private sector and the Robin Hood Foundation.
Dominican immigrant Juan Perdomo – who came to New York eight years ago looking to live the American dream – won the NaturalizeNY lottery a year ago. 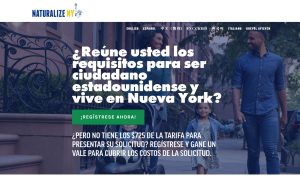 “I saw a commercial on television encouraging people to sign up for the program, so I did it online,” Perdomo, the married father of a 3-year-old boy born in the United States, told EFE. “Then they called to tell me I had won. I felt happy.”


Should he pass his citizenship test in August, Perdomo will be able to help his wife – who is a legal resident – to become a citizen, and he will become eligible to vote and run for office, among other prerogatives.


Perdomo said that like many other immigrants, he worries about the effects of the Trump administration’s new immigration policies.


Authorities, he said, “are just waiting for Hispanics to make the slightest mistake to deport them.”


The office’s 27 centers around the Empire State offer English classes, legal advice, and information on how to start a business.


More than 3,000 immigrants have registered for the NaturalizeNY lottery, which has benefited some 1,800 people, most of them from China, followed by migrants from the Dominican Republic and Mexico, Gonzalez said.


According to US Census figures, some 915,000 immigrants in New York state – 654,720 of them in New York City – are legal residents eligible for citizenship.