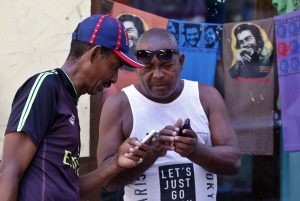 Havana, Aug 24 (EFE).- While many countries prepare for the advent of 5G wireless networking technology, Cubans are anxiously awaiting the rollout of 3G service, which will change daily habits and open up business opportunities for those who can afford it.


More than one million Cubans connected to the Internet through the 3G service for the first time during two recent free tests carried out by the state-run Telecommunications Company of Cuba (Etecsa).


“The tests were done for two reasons: first, to evaluate the efficiency and quality of 3G infrastructure in the country, and second, to measure demand and estimate what services to offer and at what price,” Carlos Parra, president of the Union of Computer Technicians in Holguin, told EFE.


The expert said this was a “much-anticipated service” that had created great excitement as it would “give citizens greater possibilities to connect to the wider world” and access the opportunities that the Internet provides.


Like many other Cubans, Jose, a 20-year-old warehouseman, has family members living in the United States and communicates with them through social media and messenger apps when he has the opportunity to access Wi-Fi networks.


“I’m anxiously waiting for them to start the service as soon as possible, so I can talk to my family through Facebook or Messenger and see how they are doing and if they can send me things,” he said. 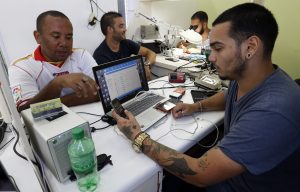 Except for the two 3G tests, Cubans have only been able to access the Internet through Wi-Fi networks at home or in public areas like parks, though their cost is high: home connections cost $15 to $17 for internet packages lasting 30 hours, while public connections cost $1 per hour.


Considering that the average monthly wage of a public-sector worker in Cuba is less than $30, it is not surprising that many Cubans cannot afford these services.


This is why one of the major concerns of the upcoming 3G service is its price, as it could prove to be unaffordable for most Cubans, except for those who receive remittances from the United States or run small private businesses.


According to the president of the Union of Computer Technicians in Holguin, however, “Wi-Fi packages are by the hour, while 3G plans will depend on the amount of data consumed, so there will most likely be several plans depending on the needs of different clients.”