To kick off the celebration, Opera Cultura is bringing Cuentos de Peregrinación/Tales of Pilgrimage to Guadalajara and Zapopan, México as concert performances on September 12 & 13. Both concerts will be conducted by Allen Vladimir Gómez and are part of the Arte Sin Fronteras/Art Without Borders Initiative. Arte Sin Fronteras was originally spearheaded by Opera Cultura in association with the Office of Cultural Affairs, the city of San José, the Mexican Consulate of San José, and the city of Guadalajara, México.

It’s a cross-cultural exchange initiative that also focuses on the cultural relationship between the two cities. San Jose-based performance artist Cellista will also travel to Guadalajara to teach a cello workshop before the concert on September 12.

On September 29, Opera Cultura has a very exciting free event planned at Hillview Library in San Jose. The event will begin with a fun youth painting workshop led by visual artist Roberto Romo, the creator of the artistic painted backdrops for Cuentos de Peregrinación.

The second half of the event will start with a special performance by one of the featured singers of the opera, soprano Alexandra Anderson. The performance will be followed by a screening of Opera Cultura’s 2014 production of the opera, and an open discussion led by Anderson and Romo.

For those who cannot attend the event at Hillview Library, there will be an online broadcast of the 2014 production of Cuentos de Peregrinación/Tales of Pilgrimage on September 30. The broadcast will be available through Opera Cultura’s website (www.operacultura.org).

Finally, the inaugural Canto: NEW VOICES Concert will take place on Saturday, October 6, at 3pm at the Trianon Theatre Recital Hall in San Jose. Showcasing the winners from the national Canto Online Vocal Competition, NEW VOICES offers the opportunity to see classical repertoire in Spanish that is not often performed, as well as new works from three up-and-coming composers. The program seeks to unite traditional and new repertoire to highlight the experience of Latino Americans through the beauty of music. INFO: For all info and any questions, see www.operacultura.org; contact 1-800-838-3006 or info@operacultura.org.

ABOUT CUENTOS DE PEREGRINACIÓN/TALES OF PILGRIMAGE

Cuentos de Peregrinación is a song cycle opera based on stories collected by composer Héctor Armienta, and retells the heart wrenching and inspirational stories of Mexican immigrants who have made the arduous journey from México to the US.

This work is intended for the community and those that want to celebrate the contributions of all immigrants – including those within our own family. Cuentos de Peregrinación was produced in 2014 at the Mexican Heritage Theater in San Jose, directed by Kinan Valdez, and conducted by Temirzhan Yerzhanov.

His work for orchestra and theater has received support from three NEA grants in artistic excellence. Mr. Armienta holds a BM degree in Composition from California Institute of the Arts and an MM degree in composition from the San Francisco Conservatory of Music. For more information, please visit Mr. Armienta’s website at www.hectorarmienta.com. 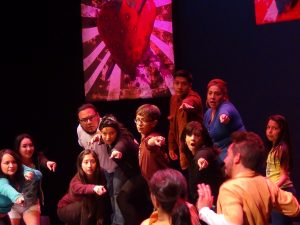 Our mission is to explore the Latino – Hispanic cultural experience through music theater and opera, while providing opportunities for the community to participate as creators, learners, and performers.

We accomplish this by presenting the work of composer Héctor Armienta, showcasing other artists, and training young people in the performing arts. By doing so, we create a cultural bridge between communities.

Cuentos de Peregrinación/Tales of Pilgrimage was developed in partnership with the School of Arts and Culture @ MHP, Kinan Valdez of El Teatro Campesino, and Father Jon Pedigo of Guadalupe Church. The first production was funded in part by the Knight Foundation, the Castellano Family Foundation, Applied Materials Foundation, Fleishhacker Foundation, the Office of Cultural Affairs of San Jose, Silicon Valley Creates and Friends of Opera Cultura.

Elizabeth Hernandez is the Cantante Sponsor for the inaugural Canto: New Voices Concert. Visual artwork is by Roberto Romo.