US Sports Desk, Sep 26 (EFE).- Mexican Saul “Canelo” Alvarez’s victory over Kazakhstan’s Gennady Golovkin in their Sept. 15 rematch for the unified middleweight title was the fifth highest-grossing boxing match ever at more than $125 million, the fight’s promoter said.


Golden Boy Promotions, whose chief executive, Oscar De La Hoya, is Alvarez’s promoter, has said it will not provide a final exact figure but confirmed that ranking based on partial revenue numbers. 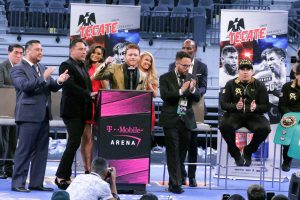 Pay TV revenue accounted for $94 million of the total, followed by $23.5 million in ticket sales for the fight at T-Mobile Arena in Las Vegas.


Additional revenue from tickets for the closed-circuit telecast and for viewing the fight online or in cinemas, as well as from the sale of memorabilia and merchandise and money raised from fight sponsors and international rights, indicate the rematch garnered more than the fighters’ initial bout on Sept. 16, 2017.


Alvarez won the rematch by majority decision, while their first bout ended in a split-decision draw.


The highest-grossing bout of all time was the 2015 Floyd Mayweather Jr.-Manny Pacquiao welterweight fight, which generated a whopping $600 million in revenue.


Mayweather Jr., who won that fight by unanimous decision and retired undefeated, also was a part of the second, third and fourth highest-grossing fights: his bout last year versus mixed martial arts champion Conor McGregor that grossed $500 million, his 2013 light middleweight contest against Alvarez that generated $150 million in revenue and his 2007 light middleweight fight versus De La Hoya that grossed $136 million.