Washington, Oct 29 (EFE).- The US government on Monday announced new nationwide efforts to fight hate crimes after the weekend massacre of 11 people at a synagogue.

Deputy Attorney General Rod Rosenstein stated at a law enforcement round table that the Department of Justice will allocate federal funds to end hate crimes, an announcement that comes two days after an avowed white supremacist and neo-Nazi opened fire inside a Jewish house of worship in Pittsburgh. 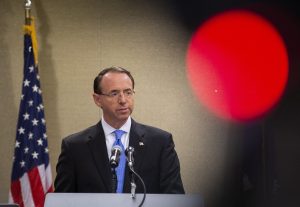 “We will continue to prioritize our work bringing perpetrators of hate crimes to justice throughout the country,” Acting Assistant Attorney General John Gore said.

Specifically, Rosenstein mentioned that the Department of Justice will allocate $840,000 to the University of New Hampshire to carry out a study on tracking hate crimes.

He also recalled that in March, Attorney General Jeff Sessions “announced that a $10 million technical assistance program known as the Collaborative Reform Technical Assistance Center – a partnership with the International Association of Chiefs of Police and eight leading law enforcement leadership and labor organizations – will now include the prosecution and prevention of hate crimes.”

Rosenstein highlighted the creation of a comprehensive hate-crimes Web site “designed to provide a centralized portal for the Department’s hate crimes resources for law enforcement, media, researchers, victims, advocacy groups, and other related organizations and individuals.”

The synagogue shooter, Robert Bowers, is to appear before a federal judge on Monday to hear the charges against him.