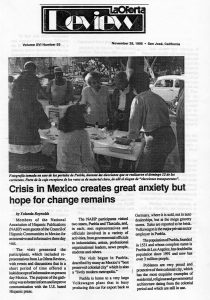 Members of the National Association of Hispanic Publications (NAHP) were guests of the Council of Hispanic Communities in Mexico for an intensive and informative three-day visit.

The visit presented the participants, which included representatives from La Oferta Review, with events and discussions that in a short period of time offered a kaleidoscope of information on present day Mexico. The purpose of the gathering was to better inform and improve communication with the U.S. based Hispanic press.

The NAHP participants visited two states, Puebla and Tlaxcala, and in each, met representatives and officials involved in a variety of activities, from governmental ofﬁcials to industrialists, artists, professional organizational leaders, news people, students and others.

The visit began in Puebla, described by many as Mexico’s “best preserved colonial city” which is also a “lively modern metropolis.”

Puebla is home to a very large Volkswagen plant that is busy producing this car for expat back to Germany, where it is sold, not in auto dealerships, but at the mega grocery stores. Sales are reported to be brisk. Volkswagen is the major private sector employer in Puebla.

The population of Puebla, founded in 1531 and whose complete name is Puebla de Los Angeles, has doubled in population since 1991 and now has over 3 million people.

Poblanos are very proud and protective of their colonial city, which has the most exquisite examples of residential, religious and governmental architecture dating from the colonial period and which are still in use.

To deal with trafﬁc congestion and increased population, Poblanos are in the process of completing a freeway system that encircles the city in an attempt to divert trafﬁc from the historic city center that is expected to reduce congestion and auto emission contamination. This program is dubbed the “Anillo Periférico Ecológico.”

Along with the diversion of traffic, Poblanos have in place a garbage collection and recycling system similar to that of San Jose’s. The City is engaged in a thorough census of its real property for both better land use planning and an assessment of community services. Land use changes in the historic part of the city are, jealously guarded in order not to detract from the beautiful character of the area.

The city also has just completed a major aqueduct that now provides potable water to an additional 300,000 households the suburban communities around Puebla by bringing in water from 10 major wells located west of Cholula.

These major public works projects, along with other community service activities as well, are credited with creating, in Puebla, 44 thousand temporary jobs. Money to pay for the new projects comes from national, state and local revenues. The jobs were especially welcome since the peso devaluation of last year and the consequent log of over 30,000 jobs in that city.

This visit to Mexico coincided with a continued slide in the value of the peso relative to the US. dollar. It also coincided with municipal and state elections that took place throughout parts of Mexico, including Puebla, Tlaxcala, and Mexico City.

Promises by leading politicians that economic reforms would bring prosperity to Mexico has not been realized. One of these reforms was the privatization of many businesses run by the government. According to some economists, a major flaw in this process was that little attention was given as to the experience or ability of the buyer.

As a consequence, one of the major disasters has been in banking, where the government has had to shut down some banks and repossess others.

Analysts say that the process of privatization also lacked critical rules and regulations that could have averted many of the problems that have occurred. Such problems including permitting some industries to become virtual monopolies, and the enactment of policies that had the effect of destabilizing Mexican agricultural production.

Some people fear major social upheavals throughout Mexico. There are reports that malnutrition has risen 100% in rural areas and that 50,000 children die from malnutrition each year.

Mexicans are justifiably worried about what will happen. There is some mention of the Free Trade Agreement, or NAFTA, but in many conversations with many people it is usually concluded that rampant corruption is at the root cause of Mexico’s problems. Mexicans are particuIarly angry at ex-President Salinas de Gortari who, they feel, helped himself and his family become very wealthy. Salinas is reputed to be now worth multi billions of dollars.

Ask almost any Mexican if President Zedillo will be able to bring back some economic stability and real economic growth to Mexico and the response is,“Vas a ser deﬁcil, le dejaron con un paquetazo y él no había tenido ganas de ser presidente.” (“it will be difficult, he was left with a very large packet of problems – and he did not have a desire to be president”). They invariably would add that the assassinated FRI candidate, Donaldo Colosio, would not only have ended the corruption but that he had the leadership qualities necessary to make much needed and desired changes in the way government is conducted in Mexico.

In spite of the very serious and daunting problems that face Mexicans today, there is, among its people, a determination to overcome these problems.

Having spent some time in the capital cities of Puebla and Tlaxcala before the three-day meeting of the US. delegation to Mexico this writer observed an almost universal steely determination that there exists among the people the ability and will to work for a better and more stable economic future and just society for Mexico.

Mexican business interests, as well as educators, are interested in developing closer ties with their American counterparts as a way to expand economic opportunities or just to share knowledge. The thought was often expressed that the future of both nations are intimately linked. Indeed, Mexico is one of the major importers of U.S. goods.

In Mexico, there is no fear of bilingual education, they prize information and communication and they are interested in developing more informal connections for communication.

English language publications and T.V. stations are readily available. In fact, U.S. news reports are current and of great interest to the average Mexican.

Mexico, like the many other nations of the world is adjusting to many global changes but there is still, in Mexico, for foreigners the lure of its rich heritage and fascinating history that is unique and quite special, like the United State, it too, is a country of diverse peoples and, like the United States, is learning to accept diversity. In Chiapas, discussions are proceeding on the demands that the indigenous people of State for greater self-determination within the larger Mexican nation. They seek a status similar to Native Americans in the United States Southwest. They are also seeking a liberty, justice, and democracy and as well vocally question the “neo-liberal” policies that created NAFTA.

A highlight of the trip was an unforgettable day with the famous Tlaxcalan muralist, Maestro Desiderio Hernández Xochitiotzin whose work tells the history of the Tlaxcalan people beginning with its pre-Columbia years, and their subsequent signiﬁcant role in Mesoamerican history.

The murals that he has painted have the objective of accurately depicting the history of Tlaxcala, which encompasses important events in the history of what is now known as the nation of Mexico. The murals are accompanied by a text of ﬁrst person accounts, relating to the scenes depicted in the murals, that for the student of history, anthropology or archaeology, serve to provide a leading source for further investigations.

This writer was entranced with the murals. Though we spent six hours viewing the murals that was not nearly enough time to absorb the many intriguing and fascinating details that are included in the murals.

The murals are stunning for their artistic beauty and the exquisite colors Maestro Desiderio uses. The murals alone are worth a visit to Mexico. The Maestro’s work is not yet complete. There are plans to expand the murals to also depict Mexico’s current history, beginning with the Mexican revolution of 1910 – the murals now end at the time of President Porﬁrio Diaz.

Mexico’s future is difficult to predict. Without a doubt, the solutions to the problems currently facing the people of Mexico and the path that will be taken into the future will not be easy and will have to be as complex as the problems that the nation currently faces.

The last elections, for the most part, appears to be free of fraud. Even so many Mexicans (75%) chose not to vote. It was explained to this writer by a resident of DF. — that the candidates had little to offer and therefore many people boycotted the elections. It was, he said, a way to keep the politicians who were elected from claiming “support of the people.”

One man when asked what he would do to begin a change in Mexico, responded that he would take every corrupt ofﬁcial and execute them. It did not occur to him that the end to corruption begins with each individual taking personal responsibility. This taxi driver, a resident of Mexico City, claimed to be lost in the area of the Zócalo and Zona Rosa. It took him over two hours together from one place to the other for a trip that, atmost should take only 25 minutes.

In Mexico, as in the United States, over the years many people have chosen to ignore what is happening in their community and governments until it became personally oppressive. One Mexican explained, it is not the lack of information — rather it is a last of awareness — “conciencia” that has created this dismal social, political, and economic crisis.

There are many positive signs that, given awareness and consideration for those less fortunate and attention to long term interests of the Nation, Mexico will overcome its current economic problems and volatile social inequality that has thrust Mexico into a very real and deep recession.

One good sign is that government leaders — members of the ruling party, PRI (Partido lndependiente Revolucionario), are actually admitting that there must be change to promote democracy – to provide fraud free elections. These same ofﬁcials now openly state that the government “disgracefully, has not done enough to develop employment opportunities for its people.”

Mexico and the United States are indeed linked as in a family. There are, as in any family, squabbles but ultimately there is a deep concern and hope that each will be a happy and successful nation. That can only happen when both peoples feel the same. © La Oferta Newspaper.