Washington DC, Nov 7 (EFE).- The White House on Wednesday withdrew the permanent credential from CNN journalist Jim Acosta, who earlier had confronted the President of the United States, in a tense press conference.


“As a result of today’s incident, the White House is suspending the hard pass of the reporter involved until further notice,” White House spokeswoman Sarah Sanders said on Twitter.


Acosta, the CNN journalist at the White House, was asked by an agent of the US Secret Service for his accreditation after leaving the presidential building, according to a video of the moment shared by the journalist on Twitter.


The permanent credential allows a select group of journalists to freely enter and leave the White House and cover the president’s day-to-day life. 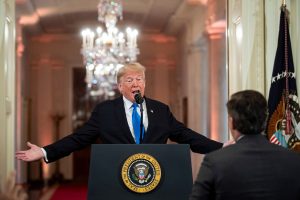 The incident that triggered the White House decision on Acosta had occurred hours earlier during a press conference in which Trump assessed the results of Tuesday’s midterm elections.


The CNN journalist engaged in a tense tug-of-war with Donald Trump, who after answering several of his questions, said “That’s enough. Put down the mic… I tell you what, CNN should be ashamed of itself, having you working for them. You are a rude, terrible person.”


Meanwhile, a White House aide approached Acosta and unsuccessfully tried to grab the microphone from him.


The White House referred to this particular fact to justify the suspension of the credential.


“President Trump believes in a free press and expects and welcomes tough questions of him and his administration. We will, however, never tolerate a reporter placing his hands on a young woman just trying to do her job as a White House intern.


“The fact that CNN is proud of the way their employee behaved is not only disgusting, it’s an example of their outrageous disregard for everyone, including young women, who work in this administration,” Sanders said in the statement.


In response to Sanders’ statement, Acosta said, “This is a lie.”