La Paz, Nov 8 (EFE).- The celebrations in commemoration of the dead in Bolivia, which began on Nov. 1, ended on Thursday with a peculiar event dedicated to the “Natitas,” human skulls attributed with protective abilities.

Like the masses that are celebrated eight days after the death of a person, the date chosen for the “Natitas” festival is Nov. 8, one week after the celebration of All Saints’ Day and All Souls Day. 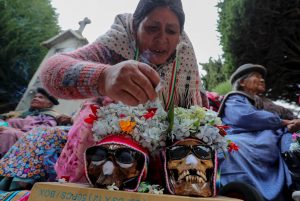 The devotees of these skulls turn up at cemeteries to worship the so-called “Natitas,” because they have no nose, in a tradition deeply rooted in Bolivian cities such as La Paz and its neighbor El Alto.

One of the most popular cemeteries is the General Cemetery, located in the populous La Paz area of Garita de Lima, in the northwest of the city.

Thousands of devotees arrived there with their “Natitas”, some brought in ostentatious glass and wooden urns and others in modest cardboard boxes or bags, but all adorned with their best clothes, from hats and caps of all kinds to chains or even sunglasses.

“Martin”, “Cirilo”, “Rosita”, “Capitan Jordan”, “Pancho” and “Maria Rene” are some of the names, shown on signs, that identify the skulls. 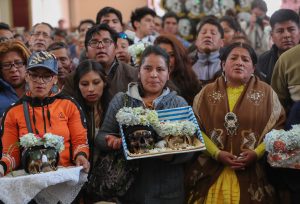 The owners of the “Natitas” went to different places in the cemetery to expose them, waiting for some devotee to approach them to light candles, offer them wreaths or flower petals and even make them smoke cigarettes, offer them drinks or hire musical groups to sing for them.

The “Natitas” come into the hands of their owners in different ways and those who welcome them do so for reasons as varied as obtaining favors, asking them for protection for their home or business, having good health or success in studies.

For more than 30 years, the merchant Genoveva Rada has had “Paulina Yupanqui” with her, the gift of a couple who promised her that this “Natita” would be “the one that will take care of her”. 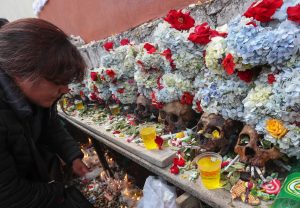 “She is one more companion for me in the house, I have her for many years, she is always by my side and today I bring her (to the cemetery),” she said.

Having a “Natita” at home implies a series of special attention and care, such as being careful to light candles every so often and, in the case of “Paulina Yupanqui”, not missing to bring flowers because that is what she likes the most, according to Rada.

After the rituals in the cemetery, some families usually go in procession to their homes or to halls hired to hold parties with plenty of food, drink and music.