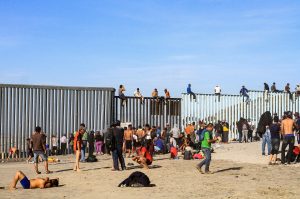 Mexico, Nov 13 (EFE).- Dozens of Central American migrants reached the US-Mexico border on Tuesday and some climbed on top of one of the border fences to demonstrate their intention of reaching their final goal of entering the United States.


The migrants arrived on foot and gathered at the beach in Tijuana, where the border fence reaches into the waters of the Pacific, under the watchful eyes of US Border Patrol agents.


Despite the presence of these agents, several members of the migrant caravan climbed the metal poles that serve as dividing wall.


The migrants arrived in Tijuana on Tuesday morning and immediately moved to the border to make sure that they are only one step away from the United States. 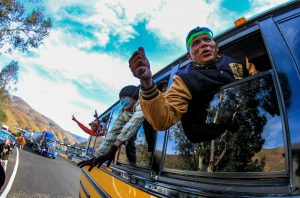 Faced with their difficulties to enter the United States, most migrants are now gathering along the border and close to a lighthouse whilst others took a swim in the sea.


The caravan of migrants departed on Oct. 13 from San Pedro Sula, Honduras and a group of some one hundred members of the lesbian, gay, bisexual and transgender (LGBT) community, has already arrived in Tijuana and plans to request asylum from US authorities in the coming days. While others have reached the state of Sonora.


Members of a second caravan of Hondurans continue to arrive in Mexico City, where, according to the latest report of local authorities some 1,200 people are now resting in a sports complex in the east of the capital. 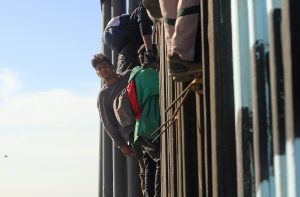 Another 2,000 migrants, mostly from El Salvador, departed on Nov. 11 from Sayula, in the eastern state of Veracruz, towards Puebla in central Mexico.


A fourth caravan, estimated at about 1,800 people also from El Salvador, is currently divided between the states of Oaxaca and Veracruz.


Meanwhile, the US Department of Defense reported on Tuesday that US Secretary of Defense James Mattis will travel to the US-Mexico border on Wednesday to inspect the status of troops deployed in the area, whose mission is to prevent undocumented immigrants from entering the United States.