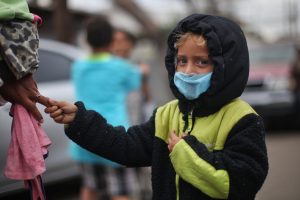 Tijuana, Mexico, Nov 19 (EFE).- Perhaps they are the most exhausted members of the Central American migrant caravan, but give them a ball or a skateboard and the children start playing with it.


They are the other side of the caravan that arrived in the Mexican border city of Tijuana and who are now waiting to request asylum in the US.


At 9 am in the shelter established in Benito Juarez Stadium one can already hear the racket from the kids who got up before their parents to do what they do best: play.


After another uncomfortable night, and almost 40 days after leaving their homes far to the south, some of the kids play at all sorts of games while others learn how to ride the skateboard.


The authorities say that more than 400 children are among the 3,000 or so caravan members who have arrived in Tijuana so far and are waiting for their compatriots, still en route northwards somewhere in Mexico from Honduras to ask for political asylum in the US or refugee status in Mexico.


Surrounded by reporters’ cameras, the youngsters show great interest in the work of the adults reporting on them and even ask to hold the cameras and microphones for a few moments.


“The first thing to take care of is their health. In the shelter, there are many sick kids (mainly with colds or stomach ailments). 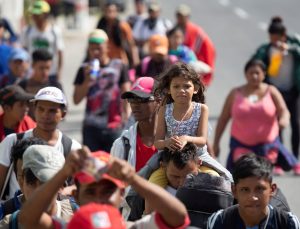 They are a highly vulnerable group and that’s because of their age and weight and they also need priority attention to guarantee their nourishment and ensure that they have a dignified place to stay,” the president of the Baja California state commission on human rights (Cedhbc), Melba Adriana Olvera, said.


Recently, Mexico’s lower house of congress asked the International Organization for Migration to cooperate with the SIPINNA protection system for children’s rights and Mexico’s National System for Integral Family Development (DIF) to take care of the caravan children, especially the ones traveling alone.


The lawmakers also called for establishing convenient and quick communications with consular officials from the children’s countries of origin to ensure that they receive consular protection, lodging and legal advice as per international human rights standards.


According to UNICEF figures, some 2,300 migrant children entered Mexico between Oct. 19-22 and the UN organization asked the Mexican government to respect their human rights.


Currently, three groups of Central American migrants are traversing Mexico heading for the US border.


The caravan left Honduras in late October and entered Mexico a few days later, where some of its members requested refuge and received work offers, but the majority traversed the length of the country either on foot or hitching rides from truckers and wound up in Tijuana.