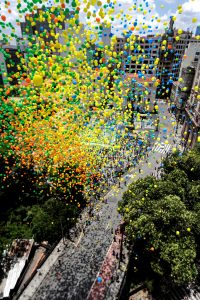 Sao Paulo, Dec 28 (EFE).- Some 50,000 biodegradable balloons turned the skies over Brazil’s largest city yellow, blue, green and orange on Friday as part of a year-end celebration launched 26 years ago.


The launch was organized by the Sao Paulo merchants association (ACSP) to highlight the struggles of 2018 and celebrate the victories expected in 2019, according to the group’s president, Alencar Burti.


“In 2018, Brazil and Brazilians suffered huge challenges and so, this year’s (balloon) design honors the country we love so much,” he said in a statement.


The tradition began in 1991, when some ASCP employees tossed confetti from the windows of the building. The following year, they released 100 balloons.


The ACSP made it an official event and moved the launch point to a historic building at the heart of Sao Paulo.


In a year marked by Brazil’s most acrimonious elections since the restoration of democracy in 1985, business-owners are hailing the consolidation of the still-weak economy after years of deep recession.