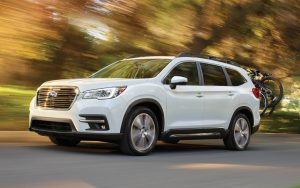 Subaru is back in the big SUV game. One of the last major mainstream automakers lacking a three-row SUV comes out swinging with the brawny 2019 Subaru Ascent.

This isn’t Subaru’s first three-row SUV effort, the generally unloved Tribeca. It quietly slipped out the door five years ago after eight years of unremarkable sales, not helped any by the car’s small third row and large thirst for fuel.

The Ascent is an altogether different SUV. With standard seating for eight passengers, or seven if specified with optional captain’s chairs in the second row, the Ascent offers nearly 32 inches of third-row legroom, about the same as its Honda Pilot rival. Its 86.5 cubic feet of maximum cargo space means you’ll rarely run out of room for gear and luggage, while a new turbocharged four-cylinder engine not only returns 23 mpg combined, but can also tow up to 5,000 pounds. 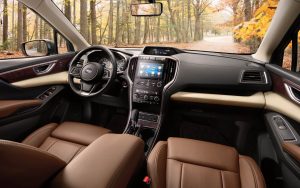 Subaru equips the Ascent with standard all-wheel drive, a Subaru signature feature that drivers in wet weather areas will appreciate. And with 8.7 inches of ground clearance, the Ascent should also prove capable of getting far off the highway when the mood strikes.

Overall, the 2019 Subaru Ascent looks to be an ideal pick for a three-row SUV, but we’ll know more for sure once we conduct a full test in the coming months.

The 2019 Subaru Ascent is available in base, Premium, Limited and Touring trim levels. Base models offer good value, especially with driver assistance features, but the Premium adds more of today’s desirable features, such as heated seats and a Wi-Fi hotspot. The Limited classes things up with leather upholstery, while the Touring maxes out the Ascent’s luxury, convenience and safety features.

All use a turbocharged 2.4-liter four-cylinder engine (260 horsepower, 277 pound-feet of torque) paired to a continuously variable automatic transmission (CVT). All-wheel drive comes standard across the lineup. 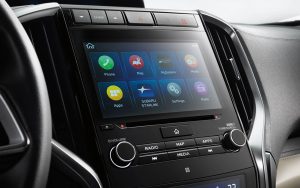 An optional package for the Limited trim gets you the panoramic sunroof, navigation system, cargo, cover and a 14-speaker Harman Kardon premium sound system. 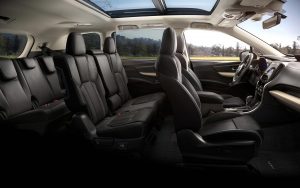 With available Wi-Fi connectivity built right into the Ascent, passengers can stream and share their favorite content online[3]. Up to eight USB ports, spread throughout the cabin for easy access, keep all those devices charged and connected[4]. 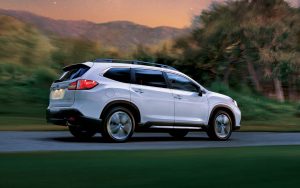 Spacious, Comfortable Interior for 7 or 8 Passengers