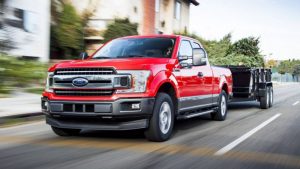 The 2018 F-150 is sporting its most advanced powertrain lineup ever, so it’s no surprise that best-in-class torque and capability features come right along with it. You want best-in-class payload? You got it … up to 3,270 lbs. How about best-in-class towing? Try up to 13,200 lbs. for size. And that’s just the beginning of F-150 best-in-class features5 . With choices that specialize in capability, efficiency and everything in between, F-150 can get the job done … and then some.

With help from its tough frame, the 2018 F-150 SuperCrew® earned an overall five-star safety rating from NHTSA.* In fact, beneath its aluminum-alloy body is a fully boxed frame made of up to 78 percent high-strength steel. The SuperCrew body is also up to 700 lbs. lighter than the previous generation, made of high-strength, military-grade, aluminum alloy. Heat-treated and hardened, it’s the same aluminum alloy as the high-grade 6000-series used in big military and industrial applications.

A few key exterior styling tweaks run through the entire lineup, from the base XL to the top-trim Limited. A new grille and headlamps evolve the look a few steps closer to the twin-bar motif of the truck’s Super Duty brothers. 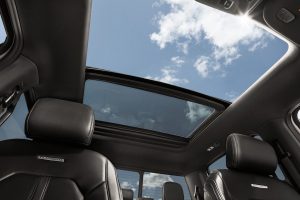 The twin grille bars on F-150 Lariats equipped with the Sport package receive body-color treatment. Out back, new taillamps bracket a sculpted tailgate with a stamped F-150 logo. The King Ranch, Platinum, and Limited get a new horizontal appliqué on the tailgate for a touch of exclusivity. Six all-new wheel designs, ranging from 17 to 22 inches, also make their debut for 2018.

Interior revisions include a pair of new trim colors for the seats. The F-150 Platinum offers a Dark Marsala hue option, and the top-dog Limited trim sees the arrival of a Navy Pier color theme. Sport and Lariat Sport trim buyers can specify faux-carbon-fiber appliqués, and the King Ranch gets specific seats called Kingsville, which sound suitably kingly. 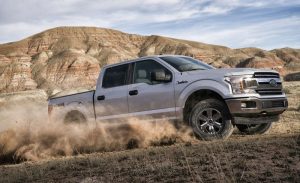 Considerable attention has been focused on the F-150’s powertrain lineup. A new direct-injected 3.3-liter V-6 replaces the previous 3.5-liter V-6 and is expected to produce the same 282 horsepower and 253 lb-ft of torque as the previous engine but consume less fuel doing so.

The 2.7-liter EcoBoost V-6 gets some love, too; the current unit is replaced by a new second-generation version with port- and direct-injection technology (the previous 2.7 was direct injection only).

The 3.5-liter EcoBoost V-6 continues for 2018, and the 5.0-liter V-8 is revised, with improvements in horsepower and torque expected. Ford, however, is not yet releasing specific output numbers for these engines.

The company is saying that both EcoBoost V-6s and the V-8 will be paired with the 10-speed automatic transmission, and auto stop/start is standard across the lineup. 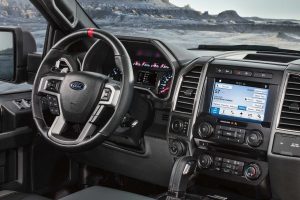 The biggest news in F-150 land for 2018 is the arrival of a diesel engine. After years of rumors and speculation—and the success of the Ram 1500 EcoDiesel—Ford finally is joining the ranks of the half-ton diesels.

Again, Ford is light on specifics, although the company does claim that the engine was “designed, engineered, and tested in-house.” (We previously had speculated that Ford might opt for a version of the 3.0-liter Lion turbo-diesel V-6 it jointly developed with PSA Peugeot Citroën years ago, which is currently used in some Range Rovers.)

We do know that Ford’s new turbocharged 3.0-liter Power Stroke diesel V-6 also will be mated to the 10-speed automatic transmission. The diesel won’t be available at launch but will appear shortly after the 2018 model goes on sale in the fall. In addition to the diesel, Ford recently announced plans for an F-150 hybrid, set to hit the market in 2020.