A group of San Joseans gathered Saturday evening to plan for suitable activities to demonstrate their concern for the recent killing of Gustavo Soto Meza by a Santa Clara County Sheriff’s Deputy. Reports are that Soto was shot in the neck as he was fleeing on foot down State street. His van had hit a fire truck and ambulance that had come to help deliver a baby.

The Deputy, Tom Langley, is reported to have followed Soto for several miles along Monterrey highway. Soto, the police reports state, had been driving erratically and at high speeds. Witnesses, of whom there are several, say that this took place around 1:30 in the morning. State is a narrow street, on which cars park on both sides.

The reaction to the shooting has been quick. A planning meeting was called to discuss a plan of action on Saturday. The meeting was held in the parking lot adjoining the Unitarian church on Third Street, in downtown San Jose. Those gathered also want a thorough and immediate investigation of the event.

One of the spokespersons, Gonzalo Fares, speaking in Spanish, explained that the gathering was not held against all the police. He pointed out that there are many good officers and pointed out that the United States had one of the best human rights records and legal systems in the world, but that the community must demand that errant police (law enforcement) conduct would not be tolerated and that the laws must be enforced fairly. He said we need to form a committee of our people. He reminded the people of others who have had a similar death, such as Danny Trevino, Art Dial, and Moses Pardo. He added that we have been targeted by Proposition 187.

Several items were almost immediately agreed upon. Volunteers were asked to form a steering committee. Several pages full of names were collected. They agreed to another planning meeting for Sunday evening. There was also strong agreement for staging a protest march through downtown San Jose next Saturday at 10 a.m. They plan to begin at the parking lot at the corner of Third St. and St. John.

Vicente Perez, a long-time resident of San Jose and respected community advocate, points out that he has noticed a change of behavior (for the worse) by some people in authority since the passage of Proposition 187.

Primary elections will take place in just a few weeks. Several people spoke of the importance of voting, explaining “let us unite and stick together now in the time to vote against racism.

There was a request that people write to Janet Reno for a Justice Department investigation of this tragic event. The family, along with others, say that they believe that Soto’s civil rights were violated.

Javier Alcala of the District Attorney’s office, at an earlier panel discussion of the event sponsored by radio KANTA, said that the Attorney’s office, in coordination with the San Jose Police department, has launched an investigation. Preliminary particulars of the investigation will then be presented to the Grand Jury. If the Jury indicts Deputy Sheriff Langley, the case will be tried in the Superior Court. The County Sheriff’s department is also investigating. 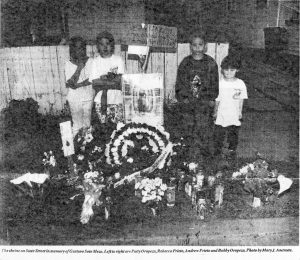 There are many questions to be investigated and answered. These include jurisdictional responsibilities, the use of deadly force on an unarmed person, endangerment of nearby residents, officer training procedures, why was Soto left unattended for at least ten minutes before any attempt was made to find out if he was dead or alive, why was this officer alone in this pursuit for such a long time, among a host of other questions.

This incident presents many issues to the community. One of these issues is that especially in the Latino community, there exists a feeling of being under siege and suspicion from the broader community as a consequence of the rancorous controversy created by Proposition 187. Some anti-immigrant spokes-persons blame immigrants for the uneven economy and the increased crime and thus treat all Hispanics as low lives.

Beyond the shooting issue there are the issues of personal responsibility and of public education on the danger of substance abuse.

According to news reports, Soto was driving erratically after an evening out at a night club. Some callers to a morning talk radio program, sponsored by radio KANTA, expressed anger and sorrow that alcohol placed Soto in this terrible situation. One woman pointed out that Soto presented a clear danger to others, if as reported he was driving under the influence of alcohol. There is great pressure for quick action on either of these two problems. The District Attorney, George Kennedy, has promised to quickly pursue an investigation n. By sending the case directly to the Grand Jury, he reduces the time of the process by one year.

The San Jose Police Department normally has jurisdiction of the area in which Soto was killed. It has also launched an investigation.

There are some who ask why the deputy is on, “Administrative Leave,” with pay. They also ask why he has not immediately fired. The judicial system requires that there be an investigation, a trial, a decision and only then the officer be exonerated, fired or even jailed, all depending upon the results of the investigation and the trial.

The public has become far less patient and increasingly skeptical about shoddy or abusive police or law enforcement ofﬁcials, but the public is also less patient with drunk drivers.

According to personnel in law enforcement and others Officer Langley, a 16-year veteran, does not have a record of any incidents or abuse. He is reported to be quite distraught. There have been no reports as to how long he had been on duty, that evening, which could be a factor in his judgement of events on that evening.

There are many beyond local government officials who will be watching this case as it unfolds, including community groups such as the GI. Forum, local union organizations, and civil liberties organizations, among others. The Mexican Consulate has already asked to be included in the progress of the investigation.

Soto is survived by his parents, a wife and three daughters.

Where Soto was killed, there is a memorial of ﬂowers, many fresh cut, an image of Our Lady of Guadalupe, a quote from the Bible of the murder of Able by Cain, and an army of lighted vigil candles. A neighbor, Peggy Elwell, who lives on State street directly across from where Soto fell to the ground, says that each day more items appear. “Just Saturday morning, a white cross appeared,” she says among the many ﬂowers and candles in memory of Soto.” © La Oferta Newspaper.