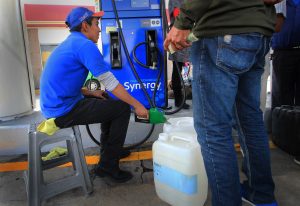 “Today we are going to reinforce the surveillance plan of elements of the army at the Pemex facilities,” the president said at his morning press conference.

When questioned by reporters, the president explained that 4,000 soldiers were already working to prevent the theft of hydrocarbons, and an additional 900 troops were added on Monday.

Eight Mexican states have experienced fuel shortages and the closure of service stations due to lack of fuel, causing long queues and panic purchases.

Pemex and the government have attributed this situation to changing the supply system model to end the massive theft of fuel from pipelines, a racket that cost the country 66.3 billion pesos ($3.3 billion) in 2018.

“We can tell … all Mexicans that we have enough gasoline, and there is no shortage problem. What we are taking care of is the distribution, we are not opening the pipelines so there are no leaks,” said Lopez Obrador.

The leftist leader said that in recent days a “very significant” decrease in the theft of fuel was achieved by going from the equivalent of more than 1,000 stolen tanker trucks to an average of 70.

In a press release, Pemex said Sunday that the supply of fuel was increasing.
“Although there have been delays in the distribution, there is enough product to cover the demand,” the company added.