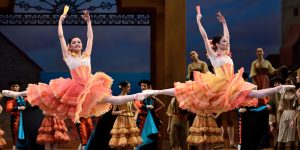 January 23 with ballet performance at 8 p.m.

With the theme of “This is Passion” San Francisco Ballet is celebrating the opening of its 2019 Repertory Season with the annual spectacular gala celebrating the artistry and expressiveness of SF Ballet, where passion for dance, selection of programs, scenery, music and costumes is a visual delight not to be missed. 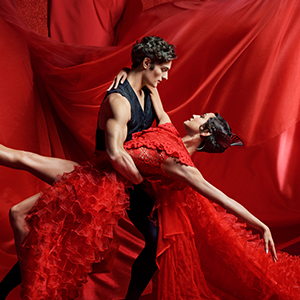 Hosted by the hard working magicians of the San Francisco Ballet Auxiliary, the gala begins with a cocktail reception and dinner at San Francisco City Hall, followed by a performance by SF Ballet at the historic War Memorial Opera House.

Guests will return to City Hall for a glamorous after-party featuring desserts, music and dancing.

This is definitely the highlight of the grandest black-tie events in the city. Did you purchase your gorgeous gown yet?

Pure fun for all ages. With sparkling wit, exuberant artistry and characters, stunning colorful costumes, scenery and show-stopping dancing, Don Quixote is the stylish rom-com of classical ballet—and an audience and my favorite. 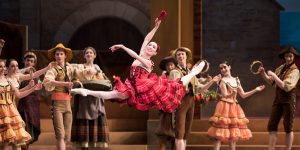 Staged by Helgi Tomasson and Yuri Possokhov’s Don Quixote, with sets and costumes designed by Tony Award winner Martin Pakledinaz, features a lively cast of characters from Miguel de Cervantes’ novel—and some of ballet’s most technically demanding dances by choreographers: Alexander Gorsky after Marius Petipa to the magnificent music by Composer Ludwig Minkus. Don’t miss the appearance of a donkey and a horse – live on stage!

Temptation at the Fair: Exploring Food on Treasure Island

Little Island. Big Ideas: It was 80 years ago when the Golden Gate International Exposition offered a taste of California’s bounty, San Francisco’s specialties and exotic world cuisines. With prohibition repealed, local beer and wine flowed, and the latest food technologies were showcased. 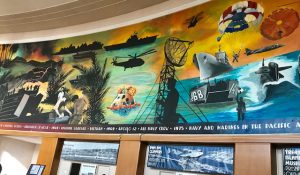 Come see what was cookin’ and how it influenced how we look at the food today. Speakers: Pam Elder and Erica J. Peters, the culinary historians of Northern California will present a fascinating and delicious lecture at the Treasure Island Museum’s iconic Building One.

Treasure Island Museum lectures series on the past, present and future are free and are presented on Saturday mornings at the architecturally stunning historic setting which provides an engaging museum’s experience as well as recollect the memories of the Golden Gate International Exposition held in 1939 and 1940. For the past forty years the Treasure Island Museum has been the steward for Treasure Island’s legacy. Only 20 minutes drive from downtown San Francisco this is a must visit man-made island in the middle of the Bay with breathtaking views and very rich history.

One Avenue of the Palms in San Francisco 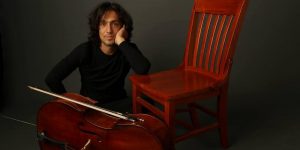 The Magical Jazz Night is this year’s repertoire for a very special Russian New Year celebration with U.S.cellist. Ian Maksin at the helm of joyous festivities. Described as one of the most versatile and innovative musicians of the modern era, Maksin, who was born in St Petersburg, Russia and began his career as a musician at the age of six at the renowned Rimsky-Korsakov Conservatory for gifted children. At seventeen Ian moved to the United States to attend the Manhattan School of Music in New Your City and later became the principal cellist for the New World Symphony.

His musical journey has taken him to performances with Mstislav Rostropovitch, Sting, Andrea Bocelli, P. Diddy and Snoop Dogg among others. Ian Maksin will perform blues, rock, jazz and world music with the DJ White Cloud as he entertains and inaugurates your New Year on a happy note.

The theme of the evening is 3Ds: Dancing, Dining and Drinking. The Russians really know how to celebrate! Join the party to catch up with your old friends and make new friends and remember: there is no need to be a Russian to have a great time. 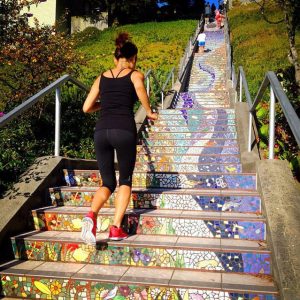 Its Time to Visit the 16th Avenue Tiled Steps

The holiday season of overindulging in too much food, wine and lack of fitness are over. Time to lace up your new holiday gift of sneakers and start counting the stairs to heaven… well almost.

Hundred of secret stairways carve their way around the city’s hills and my favorite are the 16th Avenue Tiled Steps located on Moraga Street between 15th and 16th streets in the city’s Sunset district.

The cheerful and colorful mosaic-tiled staircase emblazoned with doves, dragonflies, flowers, sun, moon and hummingbirds will make your running (or as in my case walking) exercise much more enjoyable.

When reaching the top take an i-phone photo of your achievement in order to inspire your friends to join you in this healthy and fun activity. 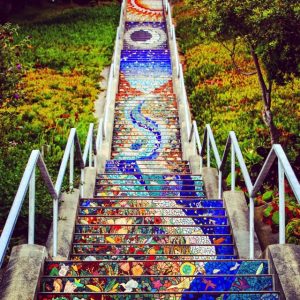