The new 2019 Ford Ranger starts at $24,300, which is one of the highest starting prices in its class. The standard configuration is rear-wheel drive with a four-person short cab and a 6-foot bed. All models offer the same powertrain, so you won’t have to worry about spending more money for a stronger engine or different transmission. 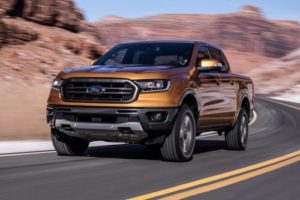 The standard SYNC system with voice commands is easy to use, though some critics bemoan the small screen. The optional touch screen is larger and intuitive, with clear menus and quick processing times. There are large physical buttons and knobs for other adjustments like audio and temperature controls.

With either cab, the Ranger has two complete sets of second-row LATCH car-seat connections. Lower anchors in the standard SuperCab are on a panel behind the rear seats. In the SuperCrew model, the attachments are in the seat cushion where the bottom meets the backrest. SuperCab models have two upper tether anchor attachments that are located above the backrest of the seat. The Ranger SuperCrew has three tether anchors, which are brackets behind the seats.

The system hasn’t been evaluated for its ease of use.

The Ranger is an all-new model, but you might not guess it by its cabin design. The interior layout is pretty plain-Jane, and it looks dated compared to other trucks that have a more modern appearance. The center stack and its basic buttons and knobs are functional but appear to have been picked out of a parts bin that was never fully restocked.

Despite having a midrange price tag for the class, lower trim levels feature noticeable hard plastic surfaces. Even the top-of-the-line Ranger Lariat, which can cost more than $38,000, isn’t as nice as the top trims of many competitors.

The 2019 Ranger comes standard with the base version of Ford’s SYNC infotainment system, which has a small 4.2-inch display screen. Voice commands control many features, and the interface responds well when you bark things out. There are also some standard amenities, like a Wi-Fi hot spot, that you might not expect to find in a basic truck, but simple features like power locks and cruise control are conspicuously absent.

Optional in the midrange Ranger XLT and standard in the Lariat trim is the SYNC 3 infotainment system with an 8-inch touch screen. This setup is regarded as one of the more straightforward and user-friendly systems on the market. Other available features include a 110-volt power outlet, dual-zone automatic climate control, proximity keyless entry, push-button start, remote start, satellite radio, HD Radio, navigation, and a 10-speaker Bang & Olufsen sound system.

Horsepower figures haven’t been released for the 2.3-liter turbocharged engine under the hood of the Ranger, but we expect this powertrain to perform well. Ford has had lots of recent success with turbocharged engines in its pickup trucks.

If the Ranger’s big brother, the F-150, is any indication, comfort will be class-leading. Higher trim levels offer leather seating surfaces along with heated seats and a few optional extras to make the cabin experience that much better.

Official towing and hauling capabilities have not yet been released for the Ranger, but we expect them to match closely to both the Chevy Colorado and the Toyota Tacoma. The Ranger will be available in both crew-cab and extended-cab configurations with a 5-foot or a 6-foot bed, depending on which cab length you select.

Available tech for the Ranger includes all the modern amenities: Apple CarPlay, Android Auto, forward collision mitigation, lane keeping assist, and even Ford’s Sync 3 infotainment interface. A few safety features, however, are only available on the top trim levels.