Caracas, Feb 11 (EFE).- Venezuela’s self-proclaimed acting president, Juan Guaido, will ask for the support of the OAS to restructure the country’s electoral authorities and organize new elections in the Andean nation, his envoy said in Washington on Monday.


“This is a visit prior to the formal request that is going to be made to the Organization of American States by President Juan Guaido to ask for the cooperation of the OAS in conducting the next Venezuelan electoral process,” Gustavo Tarre told reporters, confirming that the request will be made this week.


Tarre spoke on Monday with the secretary for the strengthening of democracy at the OAS, Francisco Guerrero, to whom he also expressed Guaido’s interest in asking for an observer mission for a future election.


“First, we want to reconstruct the electoral branch and an electoral mechanism that will be trustworthy, where not the slightest doubt exists that the will of the voters will be reflected in the results,” he added.


Tarre said that a process will be launched for selecting the members of an independent electoral authority, moving toward a new list of voters and creating a voting mechanism.


The United States, Canada, numerous Latin American countries and the major European powers all consider leftist President Nicolas Maduro’s May 2018 re-election victory to be tainted by fraud and have recognized Guaido, speaker of the opposition-controlled National Assembly, as interim president.


On a related matter, Tarre said that a small portion of the humanitarian aid now sitting in a warehouse in the Colombian border city of Cucuta will enter Venezuela “at the end of this week or the start of next week.”


“A complex logistical process” is under way regarding the aid, he said.


“Because we have to position the aid and also guarantee that once it crosses the border we have organizations from civil society that will distribute the goods,” said the delegate, who added that it is expected that the trucks will enter through the border crossing points with Colombia and Brazil.


Although he admitted that any mobilization of aid depends on whether the military allows it to pass, he expressed confidence that there would be no obstacles.


“I don’t see a Venezuelan soldier halting with a rifle someone bringing food to his dad, his mom, his kids and his siblings,” he said.


The crisis that Venezuela is going through has caused a famine on such a scale that it merits the immediate opening of a humanitarian aid corridor into the country, a young politician currently living in exile in neighboring Colombia has said in an exclusive interview published by EFE on Monday.


The 33-year-old Gaby Arellano, who entered parliament three years ago, belongs to the same Voluntad Popular (Popular Will) political party as Guaido and who had to go into exile in April, said that in her opinion the levels of hunger and privation in her country are as bad as those in countries at war or which have been hit by natural disasters.


“Unfortunately humanitarian corridors are activated in countries at war or with natural disasters, neither of which has happened in our country, but it really has to be initiated because the famine here exceeds that of many such countries,” the exiled lawmaker told EFE in Cucuta, across the border in Colombia.


More than 61 percent of Venezuelans descended into poverty and lost more than 10 kilos (22 pounds) in body weight in 2017, according to a Survey on Living Conditions (Encovi) carried out annually by the country’s main universities and which was published last month.


Arellano had to flee into exile to avoid arrest for having backed a Supreme Court ruling stating that Maduro should be put on trial.


She is the lawmaker who has been entrusted by Guaidó, who has so far been recognized by some 40 countries as interim president of Venezuela, to receive international humanitarian aid in the border city of Cúcuta. 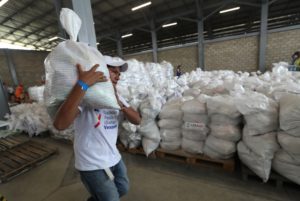 The first batch of aid arrived there on Thursday and, according to Arellano, tons more food aid will begin to flow in soon.


“We are working with two more countries that are to begin sending aid via Colombia and want to open other crossing points at our country’s borders, not just here in Cúcuta,” she said. “This town has the largest collection center and has been prepared with facilities for coping with a process like this,” she added.


Arellano said that Guaidó is to “make important announcements” on Tuesday on the entry of humanitarian aid into Venezuela and will explain “how and when.”


Youth Day is to be celebrated then and Guaidó has called for the public to mobilize against Nicolás Maduro, whom he considers a “usurper” of the presidency, Arellano said.


Meanwhile, under bridges, at street crossings or on sidewalks, Caracas barbers are jamming the public thoroughfares with improvised workstations to offer customers inexpensive hair salon services.


Whether under the glaring sun or in the cool shade of a tree, these street barbers offer their services to whoever approaches. Some, like Franklin, have set up a folding table in front of a damaged barber chair.


Others, like Alberto, have joined forces with colleagues and upgraded their street workstations into improvised shops under the Armed Forces overpass with plenty of mirrors, benches on which to wait one’s turn in the barber chair and the traditional music playlist that distinguishes barbershops.


Alberto, with 14 years of experience in the field, smiles and tells EFE he paid someone to paint an equestrian Simon Bolivar on the pillars of the bridge so that clients could admire it while getting their hair cut.


The painting of the omnipresent liberator was inspired by his iconic statue in Caracas located just 200 meters (yards) away from the shop, but it also helps guide customers to the spot: “It serves to orient people looking for the square or an exact reference point.”


“It is the representation of my country because my country is something very beautiful,” says Alberto while the vehicles crossing the bridge rumble by overhead, right in the center of Caracas.


The ever-smiling hair-cutting expert explains that he specializes in “making drawings” on heads, a service which makes him very popular with his clientele.


“Sometimes it takes me half an hour or 15 minutes but it requires dedication and time,” he says.


His barber shop, located in the midst of the city’s chaos and pollution, has also become a place of calm and relaxation for many citizens who pass by and look at the mural that inspired the name of his establishment.


Some of the bystanders stop and inquire about the price of the services.


“1,500 cash (45 cents) or 2,000 points (credit card),” says Alberto, who gives his rates in Venezuelan bolivars, although the cost shifts – always remaining the equivalent of about 50 cents – depending on whatever the crazy Venezuelan exchange rate is on any given day.