“We’re announcing that Feb. 23 will be the day for the entry of the humanitarian aid, and so from today we will work with all sectors – transportation workers, nurses” who must introduce and distribute the aid, said Guaido at the close of a rally in Caracas.

The United States, which rushed to recognize Guaido’s claim to the presidency, is organizing the aid effort, which elected head of state Nicolas Maduro denounces as a prelude to military intervention by Washington. 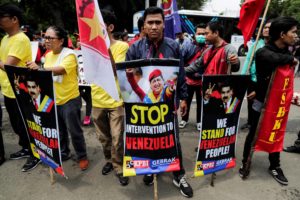 The 35-year-old opposition leader said that next weekend assemblies will be held and “humanitarian camps” will be established with an eye toward organizing and preparing everyone who has volunteered to help distribute the aid to go to the country’s border with Colombia if the military does not allow the aid to be brought in.

“We have to go in caravans, in protests, in mobilizations,” he said.

Since last week, the Colombian border city of Cucuta has been warehousing donations provided by the neighboring country, the US and others for Venezuela.

The opposition leader thanked the international community for the support and the donations it has provided and told Venezuela’s military that “you will have several days to put yourselves on the side of the Constitution and humanity to allow the entry (of the aid) and access (to it).”

During the same speech, Guaido ruled out the possibility of civil war in Venezuela.

“You (government supporters) talk about an alleged war that will not exist,” he said. “Who would be ready to go to war if (Maduro) has neither the support or the respect of his neighbors and the world?” he asked.

Maduro and the No. 2 person in the ruling leftist PSUV party, Diosdado Cabello, have insisted on numerous occasions that there is a risk that Venezuela could slide into civil war and have said that, if a foreign intervention occurs, the country would become “a Latin American Vietnam” for the US. 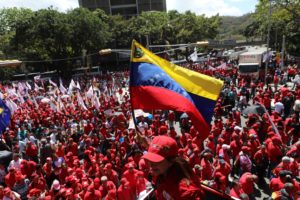 Meanwhile, Maduro, on Tuesday called for the “threats of military invasion” to recede from the country, which has been mired in a severe political, social and economic crisis over the past month after his legitimacy as president began to be questioned by numerous nations.

At the event, which was required broadcasting on all radio and television stations in the South American country, Maduro made an announcement concerning Feb. 23, the date on which the Venezuelan opposition says that humanitarian aid will begin entering the country across its borders with Colombia and Brazil.

Without mentioning that prospective entry of the humanitarian aid – primarily food and medicines – provided by assorted governments and companies, Maduro said that his administration will organize for Feb. 16, 17, 23 and 24 a house-to-house drive to sign up young people for his employment plan.

The Chavista leader has said that he will not allow any humanitarian aid to enter the country, claiming that this would simply be a pretext for foreign invasion. 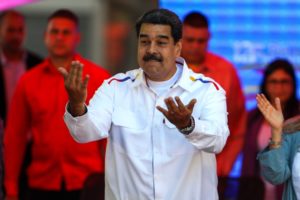 According to Maj. Gen. Manuel Quevedo, the US Treasury Department’s sanctions on the state-owned company PDVSA that dominates Venezuela’s oil and gas industry – that generates more than 90 percent of its export revenue – could provoke losses of at least $20 billion and have put pressure on

Caracas to find new ways of increasing trade with partners such as India.

“We currently have commitments with India totaling 366,000 barrels (of crude oil) per day,” Quevedo, who also acts as PDVSA chairman, said during his EFE interview in New Delhi. “We want to increase that number, very soon, to at least twice as many barrels.”
Quevedo explained that Venezuela’s goal was to bring the amount of oil supplied to India to similar level sold by the Caribbean country to China.

“All the oil that India needs, Venezuela has it,” he said, adding that all possible forms of payment – including barter arrangements – were on the table.

This strategy would make China, India and Russia Venezuela’s three main trading partners, all of which have previous experience eluding diplomatic pressure exerted by Washington.

In Jakarta, scores of Indonesians on Tuesday protested in front of the United States Embassy against interventionist policy of Washington and its allies and their economic blockade of the crisis-ridden Venezuela.

Over 100 demonstrators, belonging to some trade unions and university groups, marched through the city with placards in support of the Venezuelan people, as well as the ones asking US President Donald Trump to stay away from interfering in Venezuela.

The march, according to Gebruk workers movement spokesperson Nining Elitos, was to denounce the US imperialism because it does not respect the sovereignty of the people of Venezuela.

The unions criticized the recognition of Speaker of the Venezuelan Parliament, Juan Guaido, as the country’s president by the US and other countries, claiming it was detrimental to the Venezuelan democracy.

President Trump was the first foreign leader to recognize Guaido after he proclaimed himself the interim president of the country on Jan. 23, amid a severe political crisis involving clashes between groups opposing and supporting Venezuelan President Nicolas Maduro. 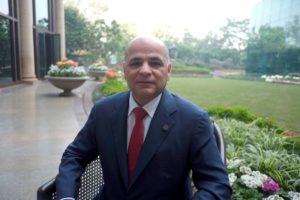 On the winding highway between the Colombian cities of Cucuta and Pamplona, volunteers acting like guardian angels provide clothing, food and shelter for Venezuelans walking away from the crisis in their country to find a better life in other South American nations.

After entering Colombia by the Simon Bolivar International Bridge, dozens and perhaps hundreds of Venezuelans walk every day the 77.6 kilometers (48.2 miles) between the heat of Cucuta and cold Pamplona on a highway that often presents steep slopes to climb, and on which, according to Colombian Red Cross estimates, their hike can take 17 hours.

Pamplona is the first main stop on a much longer trek of hundreds of kilometers, between Cucuta and cities of the interior like Bucaramanga, Bogota and Medellin, along which they must deal with obstacles like the Paramo of Berlin, a kind of foggy moorland with temperatures that sink to around freezing before sunrise.

Nonetheless, Venezuelans on that road find shelters where they are donated clothes and given medical care, a great relief on their punishing journey with a suitcase or bag of goods packed on their backs, or in many cases, little children.

One such shelter was established by the evangelical church known as the World Revival Center headed by Pastor John Jairo Gauzaya, who told EFE that his goal is to “provide the migrants with meals, food products, shoes, clothes, and above all, the word of God.”

“Our intention is to give to everyone in need whenever we have what they need,” he said.