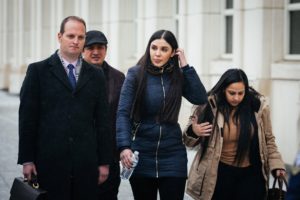 Mexico City, Feb 13 (EFE).- Mexican President Andres Manuel Lopez Obrador said Wednesday that he hoped the conviction of Joaquin “El Chapo”(Shorty) Guzman on drug trafficking charges in the United States would serve as a “lesson” to other criminals.


“It should serve as a learning opportunity and it should be a lesson” to other drug traffickers, the leader of the National Regeneration Movement (Morena) said in his morning press conference.


On Tuesday, the jury hearing the US federal case against Guzman found him guilty on nearly a dozen counts, including the charge of running a criminal enterprise, which carries a mandatory sentence of life in prison without possibility of parole.


Lopez Obrador said the case was heard in a US court and the legal process should be “respected.”


“We don’t wish anyone ill. I wish that those who take this path would go straight,” Lopez Obrador said, referring to the notorious leader of the Sinaloa drug cartel.


The 61-year-old Guzman was found guilty on all 10 counts he was facing in the 11-week trial.


The jury, whose members were granted anonymity to protect them from Guzman and his associates, failed to reach a unanimous verdict on only two counts related to cocaine trafficking in 2007 and marijuana trafficking in 2012.


Lopez Obrador said criminals should realize that their freedom is a “very precious gift” and they should not “cause harm” to other people or their families.


A life of crime only leads to “suffering,” the Mexican leader said, noting that it was unfortunate that people today associate “true happiness” with luxuries, fame and “material things.”


“True happiness is feeling good about yourself, having a (clear) conscience, and (feeling good) about others,” Lopez Obrador said.


The president said his administration would roll out a program soon to fight drug use among young people.
Several media outlets reported that Nicolas Gonzalez, the Federal Police officer who arrested Guzman, would be fired by the law enforcement agency.


El Chapo was captured in Los Mochis, a city in the northwestern Mexican state of Sinaloa, in January 2016 and extradited to the United States on Jan. 19, 2017.


The president was asked whether Gonzalez would continue to receive protection from federal authorities.


“Austerity does not apply in this case … Journalists, people who are threatened and require protection, will always get protection from us, it’s an obligation,” Lopez Obrador said.


Armed US Marshals and K-9 units were posted both inside and outside the courtroom.


The Sinaloa cartel, sometimes referred to by Mexican officials as the Pacific cartel, is the oldest drug cartel in Mexico.


The Sinaloa organization, according to intelligence agencies, is a transnational business empire that operates in the United States, Western Europe, Eastern Europe, the Americas and Asia.