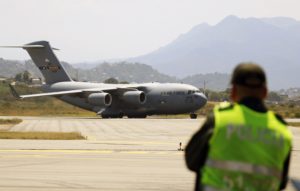 Caracas, Feb 17 (EFE).- US Sen. Marco Rubio on Sunday arrived in the Colombian city of Cucuta to supervise the humanitarian aid that is being warehoused on the border with Venezuela and which is expected to be delivered starting next Saturday.


“I arrived in #Colombia this morning. Today another huge delivery of humanitarian aid for #Venezuela will arrive. I will be meeting with officials leading the effort to store this at the border & prepare it for delivery to the suffering people of #Venezuela,” said Rubio on his Twitter account.


During his stay in Cucuta, the capital of Norte de Santander province, the Republican senator from Florida is also scheduled to meet with Colombian government officials and tour the Simon Bolivar bridge, the main border crossing point between the two countries.


Rubio traveled to Colombia with the US envoy to the Organization of American States, Carlos Trujillo, and Republican Congressman Mario Diaz-Balart, also of Florida, who will also take part in overseeing the distribution of humanitarian aid via the US Agency for International Development (USAID).


Rubio said in a communique that Americans, Colombians and Venezuelans are ready to provide humanitarian aid needed by the people of Venezuela.


Rubio on Sunday asked the Bolivarian National Guard to “make the correct decision” and allow the aid into Venezuela.


Calling the Venezuelan military’s denial of passage for the aid an “international crime” and a “crime against humanity,” Rubio spoke during his visit to the Colombian city of Cucuta, going on to emphasize the courage of the Venezuelan people who are fighting for their freedom, saying that freedom and democracy require sacrifice.


On Saturday, three C-17 US Air Force cargo aircraft arrived at the Cucuta airport loaded with tons of nutritional supplements and hygiene kits, which will be added to the humanitarian aid already collected there over the past week.


The US and Colombia were the first countries – later joined by most of the Western Hemisphere and European nations – to recognize Juan Guaido, the head of Venezuela’s opposition-controlled Parliament, as the country’s interim president last Jan. 23.


Meanwhile, the Venezuelan opposition on Sunday set up about 10 camps around the country where it took a census of thousands of people who it promised to help with the humanitarian aid being collected in Cucuta.


Lawmaker Winston Flores told reporters at one of the camps in the poverty-stricken Caracas neighborhood of Macarao, that on Sunday officials “noted and diagnosed” the illnesses plaguing the most vulnerable people, mainly children and the elderly.


“It’s vital work for us to have this launching point for what will be the humanitarian avalanche on Feb. 23, when the humanitarian aid needed so much by Venezuelans will enter, en masse,” he added in remarks broadcast by VPI online television.


He also said that “some medicines” were distributed for hypertension and diabetes, provided that the patients could present medical prescriptions.


Preliminary figures compiled at the camp show that the most common illnesses and conditions found there are skin diseases, diabetes, hypertension, Parkinson’s, osteoporosis and malnutrition – the latter in children.


According to Flores, working without pay in the humanitarian camps are hundreds of doctors, psychologists, nutritionists and volunteers from opposition political parties, as well as some of the more than 600,000 volunteers from a network that will work to distribute the aid.


Venezuelan opposition lawmaker Rafael Guzman told EFE on Sunday that Russia’s Gazprombank blocked the accounts of Venezuela’s state-run oil firm Petroleos de Venezuela (PDVSA), which has been sanctioned by the United States, while the Maduro regime denied that that had been done.


“The information we have is first-hand,” said Guzman during a telephone conversation with EFE, claiming that the Russian bank had blocked PDVSA’s accounts.


“Gazprombank is not interested in continuing with more problem,” he added, noting that the restrictions that the institution has already suffered in doing business in the countries of the European Union and the US.


In addition, he said that Gazprombank could have blocked PDVSA’s accounts to cover an outstanding debt owed by Maduro’s government.


The opposition-controlled Venezuelan Parliament weeks ago had asked 46 countries – including Russia – and their financial institutions to block PDVSA’s accounts in those territories to prevent the “looting” of the firm’s resources by members of the Maduro regime.


PDVSA, however, on Sunday said that the report of the Gazprombank move was incorrect – calling it “fake news” on its Twitter account – and made with “bad intentions,” without offering further details.


In Caracas, the Maduro regime expelled a mission of Europarliamentarians who were going to visit the country and hold various meetings, including one with Guaido, lawmaker Esteban Gonzalez Pons told EFE.


“They’re expelling us, first they detained us … they took our passports from us and, without explaining anything to us about the passports, they continued to hold them.

They’re taking us directly to an aircraft that I espect will go to Madrid, but they’re expelling us from the country,” Gonzalez Pons told EFE by telephone.


Gonzalez Pons said that the opposition-controlled Parliament had specifically and formally invited the group to publicly visit Venezuela.