The head of state said the new plans for the site of the Islas Marias Federal Prison – located on the Pacific archipelago’s biggest island, Isla Maria Madre – would bring an end to an “infamous” history.


Lopez Obrador signed the decree that shuts the prison and launches the new project in a ceremony Monday at the National Palace, saying his executive order was “full of symbolism.” 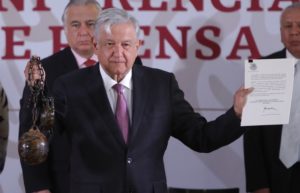 Founded in 1905, he recalled that the prison dates to the era of dictator Porfirio Diaz, who was president of Mexico for much of the period from 1876 to 1911, and reflects a history of “punishment, torture and repression lasting more than a century.”


He recalled that writer and political activist Jose Revueltas (1914-1976) was an inmate at that prison for years.


The facility currently houses 600 low-risk prisoners. Of them, more than 200 will be released and the remainder will be relocated to facilities near their homes.


Workers on the island also will be reassigned to other penitentiaries.


The decree will make the archipelago, which has been a natural protected area since 2000, a center for “the arts, culture and knowledge about the environment and nature.”


For her part, Environment and Natural Resources Secretary Josefa Gonzalez said the center would be named after Revueltas’ first novel, “Los muros de agua” (Walls of Water), which is based on his experiences at that island prison.


Activities at the center will include youth camps with an environmental, cultural and outdoor program.


Located 120 kilometers (75 miles) off the coast of the northwestern state of Nayarit, the four-island archipelago was made into a prison in 1905 during Diaz’s reign to house the worst criminals of that era.


Many decades ago, however, it was transformed into a prison for inmates who represent little danger to the public.


Its most notable occupants have included Revueltas and Concepcion Acevedo de la Llata (known as La Madre Conchita), who was convicted of masterminding the assassination of President-elect Alvaro Obregon in 1928.


In 2009, the federal government established a voluntary transfer program for prisoners that was aimed at raising the number of inmates at the Islas Marias Federal Prison to 5,000. Including their accompanying family members, the plan called for the total number of people at the penal colony to rise to 10,000.