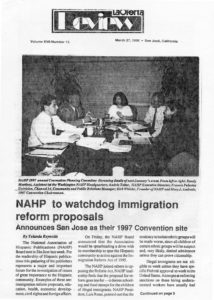 The National Association of Hispanic Publications (NAHP) Board met in San Jose last week. For the readership of Hispanic publications this gathering of the publishers represents a major and important forum for the investigation of issues
of great importance to the Hispanic community. Examples of these are: immigration reform proposals, education, health, economic development, civil rights and foreign affairs.

On Friday, the NAHP Board announced that the Association would be spearheading a drive with its membership to spur the Hispanic community to action against the Immigration Reform Act of 1995.

The NAHP joined others in opposing the Reform Act. NAHP leadership feels that the proposal for reform goes too far ­­– it denies schooling and food stamps for the children of illegal immigrants. NAHP President, Luis Rossi, pointed out that the
tendency to isolate ethnic groups will be made worse, since all children of certain ethnic groups will be suspect and, very likely denied admittance unless they can prove citizenship.

Illegal immigrants are not eligible to work unless they have specific Federal approval to work in the United States. Attempts at enforcing sanctions on these hiring undocumented workers have usually had the result that those who appear to be employment – even if they are citizens.

Central Valley publisher of “El Sol del Valle,” Kevin Kennedy, pointed out that parts of the Reform Act have been improved with the separation of the discussion now divided between legal and illegal immigration.

For many the discussion on immigration is very troubling since the Statue of Liberty, an important U.S. symbol, is graced with the poem “The New Colossus” by Emma Lazarus that concludes with the statement: “Give me your tired, your poor, your huddled masses yearning to be breathe free. The wretched refuse of your teeming shore. Send me these, the homeless, tempest to me, I lift my lamp beside the golden door.”

The Statue of Liberty is located on Ellis Island, near New York City, where the island sewed the point of entry and processing for the 12+ million immigrants who left Europe in the late 1800’s and early 1900’s. In 1880 there were 62+ million people in the United States. The U.S. population in 1990 is almost 249 million people.

In California, the immigrant population seems larger. In fact, it is larger, because it has been the State in which a majority of the immigrants choose to live. It is here that there is a loud clamor abetted by some politicians for political purposes. to end all immigration, both legal and illegal.

It is to this State and a few others, like Texas, that immigrant advocates point to as examples of the enormous prosperity which these States enjoy because of the talent, hard work. and vision of recent immigrants.

Board spoke person, Mary Montgomery, representing “El Extra,” a publication in Chicago, Illinois pointed out that Polish immigrants have been the driving force in the economic revitalization of formerly blighted areas of Chicago.

Art Aguilar, “East Los Angeles/Commerce Tribune” publisher, ask that citizenship be encouraged as a way to end immigrant bashing and to influence government policy. He added, “we (Latinos) are not an automatic vote for anyone.” He explained, “we want legal immigration and citizenship to be a priority – people are contributing to the economy.”

Andres Tobar, the Executive Director of the association, presented a timely (1995) report of the population characteristics of Hispanics-Latinos in the United States.

The report was prepared by Dr. Carlos Cordova and Dr. Jorge Pinal of San Francisco State University and based on data gathered by the United States Bureau of Census.

Funding was made possible by a grant from Philip Morris Companies, Inc.

This report is a valuable source for companies considering entry into the large and growing Hispanic Latino market.

Also, the NAHP leadership was in San Jose to finalize plans for the next NAHP annual convention, which is slated to take place Jan 28-February 1, 1997 in San Jose. La Oferta Review co-publisher and NAHP Region 6 Director, MaryAndrade, is Chairwoman of the 1997 convention.

San Jose City Councilman, Manny Diaz. on behalf of both the City government and County government made a commendation of welcome to the NAHP board.

Andrade announced that an invitation to Mexican President Ernesto Zedillo Ponce de León has been personally delivered to Lic. Antonio Ocaranza Fernandez, Director of International Communication, in Mexico City. If all goes well for a visit by Zedillo, he would be the honored guest and keynote speaker

at the gala banquet of the convention. This year. President Clinton attended the NAHP Convention and addressed the membership.
For more information on the upcoming Conference, contact NAHP Region 6 Director Mary Andrade at 436-7850.