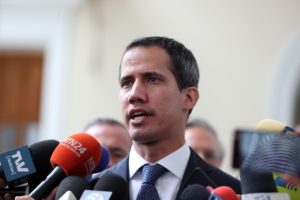 Caracas, Feb 19 (EFE).- The Venezuelan military reaffirmed on Tuesday its loyalty to Nicolas Maduro in the face of US President Donald Trump’s threat that the generals and admirals will “lose everything” if they do not switch their allegiance to self-proclaimed interim head of state Juan Guaido.

The military “will remain deployed and alert throughout the borders, as ordered by our commander-in-chief, to avoid any violation of its territorial integrity,” the Bolivarian National Armed Forces (FANB) said in a statement.

“The eyes of the entire world are upon you, today, every day, and every day in the future,” Trump said Monday in a speech at Florida International University in Miami, addressing his comments to the Venezuelan military.

“You cannot hide from the choice that now confronts you. You can choose to accept President Guaido’s generous offer of amnesty, to live your life in peace with your families and your countrymen,” he said in front of an audience including many Venezuelan expats.

Senior officers who decline to throw their support to Guaido stand to “lose everything,” the US president said, before again suggesting the possibility of American military intervention in the oil-rich South American nation. 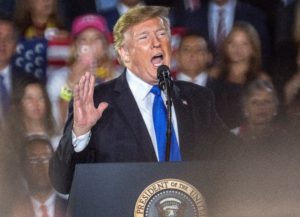 “We seek a peaceful transition of power, but all options are open,” Trump said.

“It is imperative to reiterate to the world that we are witnessing an escalation that has resorted to the hybrid warfare method, to suffocate the economy by imposing an economic and financial blockade, which is aimed at generating ungovernability, chaos and anarchy,” Padrino said, reading from a prepared statement.

Members of the FANB are not “mercenaries for sale to the highest bidder,” the defense minister said.

On Jan. 23, Guaido, the speaker of the opposition-controlled National Assembly, proclaimed himself interim president hours after US Vice President Mike Pence encouraged him to take that step and assured him of Washington’s support.

Trump quickly recognized Guaido as president and roughly 50 other countries have followed suit, including Canada, Colombia, Argentina and Brazil, as well as major European powers France, Germany, Spain and the United Kingdom.

Those nations agree with the Venezuelan opposition that Maduro’s May 2018 re-election victory was a sham.
Russia, China, India, Iran and Turkey are among several dozen countries that continue to recognize Maduro.