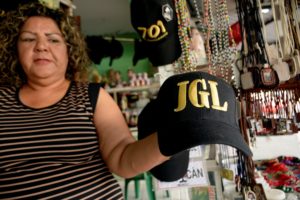 Culiacan, Mexico, Feb 20 (EFE).- A Joaquin “El Chapo” Guzman-themed action figure, bingo game and scapular are among the items being sold in the northwestern Mexican state of Sinaloa, where the notorious former capo maintains a devoted following despite being convicted last week in a drug-conspiracy trial in the United States.


Guzman’s three-month trial in a New York court, which ended on Feb. 12 with his conviction on all 10 criminal counts, sparked renewed interest in the erstwhile Sinaloa cartel chief and narcoculture in general and revived the gratitude that many residents of the municipality of Badiraguato and of Culiacan, the state capital, still feel for El Chapo.


There also has been a rise in recent days in the number of people visiting the chapel of Jesus Malverde (1870-1909) – a Robin Hood-like figure who has been adopted as an outlaw patron saint by drug traffickers and regarded as a defender and protector of the poor – to pray for El Chapo or thank him for favors they received.


“Because of what’s happening to him, many people are now coming to ask (Malverde) to give (El Chapo) peace of mind, to give him strength to endure everything that’s happening. Many, many people have come. You see lots of candles with his name on pieces of paper.

The people come and thank him for his favors and also pray for El Chapo,” Jesus Gonzalez, who runs the chapel, said.


With Guzman having been on trial in recent months, the chapel’s stores have been selling not only traditional items like devotional scapulars and candles but also an action figure of El Chapo, a notorious drug lord who broke out of prison on two occasions before being captured a third time in January 2016 and then subsequently extradited to the US.


Shopkeepers say the figure is made of ground animal bones mixed with resin and shows El Chapo standing on a wooden base containing a plaque with the number 701 (the drug lord was once ranked as the 701st wealthiest individual by Forbes magazine).


The figure is wearing blue jeans, a pink shirt, a baseball cap, a bullet-proof vest holding four grenades, a radio on his belt and a rifle strapped to his back. 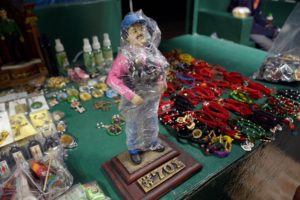 The stores also sell a “narco-bingo” game whose cards contain the photos of notorious underworld figures such as La Barbie, El Mencho, El Vicentillo, Serafin, El Azul and Guzman and his children. Images of Jude the Apostle, regarded by some Catholics as the patron saint of lost causes, and Malverde are centrally positioned.


Other items featuring photos of Guzman or references to him also are sold at the store: leather scapulars (50 pesos), T-shirts (300 pesos) and black caps with the initials JGL (Joaquin Guzman Loera) or the name “Cartel de Sinaloa” in gold letters (100 pesos).


In Badiraguato, a municipality in Sinaloa state where El Chapo’s rural hometown of La Tuna is located, some people revere Guzman more than Malverde or any saint for having built schools and helped communities in times of difficulty.


On Feb. 12, a jury in New York found Guzman guilty on all 10 counts as leader of the Sinaloa Cartel. He now faces life in prison at a sentencing hearing scheduled for June 25.


The jury heard testimony from 56 witnesses, 14 of whom were former associates of Guzman’s who were cooperating with US authorities in hopes of obtaining sentence reductions.


Mexican President Andres Manuel Lopez Obrador visited Badiraguato on Feb. 15 to promote development and make the point that the people of Badiraguato are not responsible for the actions of the notorious former resident and should not be stigmatized.


He also said many poor people in Mexico have gone down the wrong path due to a lack of alternatives and vowed to turn the country around by fighting corruption and ending the embezzlement of money from the budget.