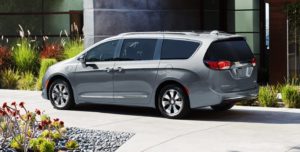 The Chrysler Pacifica has a lot going for it. It has more style than the typical minivan. Its Stow ‘n Go seats make for easy transport of large items. The infotainment system is easy to use. There are abundant safety and tech features to choose from. And almost all of this appeal transfers over to the 2019 Pacifica Hybrid.

Sure, the hybrid doesn’t get the second-row Stow ‘n Go seats (the hybrid battery fits in their storage compartment), but the fixed captain’s chairs in their place are actually more comfortable. Plus, that hybrid powertrain significantly improves fuel economy since its plug-in capability allows for about 33 miles of electric range on a full charge. For some drivers, that’s enough to avoid using gasoline for weeks or even longer. Once you do run out of electricity, the EPA estimates that it will return 32 mpg combined, which is 10 mpg higher than the standard van.

By some minivan standards, the Pacifica Hybrid also has some drawbacks. The 2019 Honda Odyssey, for example, is better to drive, is more spacious, and has a more versatile seating setup. It’s also worth noting that the Pacifica Hybrid is significantly more expensive than the gas-only Pacifica van, especially at base trim levels. There are potential fuel savings and tax rebates to consider, but those aren’t realized at the time of purchase. 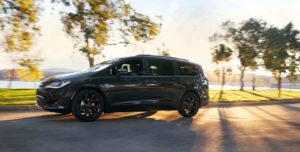 In the end, if you’re looking for a minivan with plug-in power, the 2019 Chrysler Pacifica Hybrid is the only option out there. It isn’t our favorite van, but it certainly has several virtues that make it worth considering.

Pacifica Hybrid’s Uconnect is one of the easiest infotainment systems to use, thanks to a large 8.4-inch touchscreen display, clear graphics and controls.

Uconnect is one of the best systems in the class. The controls are easy to understand with a convenient menu on the lower portion of the screen for main commands. Navigation info can be displayed on the center screen or within the gauges for easy viewing.

It’s easy to plug in, boot up and index music quickly via the USB ports. No problems connecting devices via Bluetooth either. Apple CarPlay and Android Auto are standard for 2018. Rear USB ports not available on base trim. 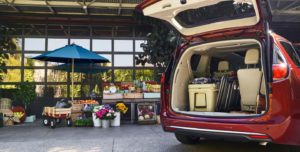 The Pacifica Hybrid uses the same 3.6-liter V6 engine as its gas-only counterpart, though here it operates on the more efficient Atkinson cycle. The engine is paired with an electrically variable transmission that combines the power of two electric motors for EV-only driving and dual-mode hybrid operation. Altogether, Chrysler lists total system output as “around 260 horsepower,” which is considerably less than the 286 horsepower made by the gas engine in standard Pacificas.

Fortunately, the nature of electric motors with their ability to provide torque on demand makes them feel more powerful than their specs suggest. In other words, the Pacifica Hybrid has no trouble in the get-up-and-go department, despite weighing about 500 pounds more thanks to its battery pack.

As mentioned, the suspension is on the firm side, probably to keep that extra weight in check. While it doesn’t create the cushiest ride, it does make the Pacifica Hybrid a surprisingly competent handler. The stiffer suspension, combined with a much lower center of gravity thanks to the batteries’ placement underneath the floor, keeps this minivan from feeling tippy in turns and imparts a high degree of confidence in corners. 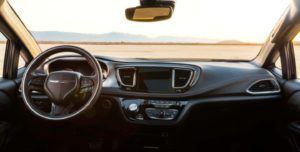 Chrysler earns high marks for safety on account of the Pacifica Hybrid’s level of standard safety equipment and the affordability of its optional items. Blind-spot monitoring and rear-cross-traffic-alert systems are both standard on all trim levels, as are rear parking sensors with automatic braking.

The one catch is that the Advanced SafetyTec Group is available only on the Pacifica Hybrid’s most expensive Limited trim.