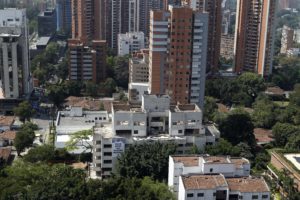 Medellin, Colombia, Feb 22 (EFE).- A high-rise building in this northwestern city that once served as the residence and headquarters of notorious drug lord Pablo Escobar was reduced to rubble in just three seconds on Friday.


In its place, a park will be built in honor of the victims of narco-terrorism in Colombia.


The project to demolish the Monaco building has been touted as a first step in closing old wounds and paying tribute to the victims of narco-terrorism in the city during the 1980s and 1990s.


“The crucial thing to understand is that it was a building in ruins and that it would have cost around 40 billion pesos (around $12.8 million) to restore it, and that as mayor I’m not willing to have that amount of money invested there,” Gutierrez said.


“It’s better that a site like a park in honor of the victims be built in the form of a memorial, which costs 10 times less, rather than restore a building that isn’t a symbol of the victims, but rather of a murderer,” the mayor said. 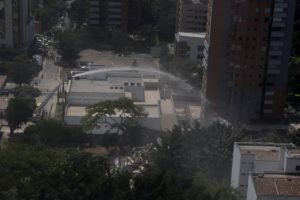 Singer-songwriter Juanes, who was raised in Medellin, was on hand to see the demolition of the eight-story building that had stood in the city’s affluent El Poblado district.


“It’s great to be here with you. This is another step in the long road to reconstructing our memory,” the recording artist said.


Escobar, the late founder and leader of the Medellin Cartel, briefly lived in the late 1980s at the Monaco building, which served as his fortress-like residence and was home to 12 apartments, 34 parking spaces, three elevators, tennis courts, swimming pools and a Turkish bath.


The drug lord chose El Poblado’s Santa Maria de Los Angeles neighborhood as the site for the edifice, which was named after the Mediterranean principality of Monaco, built in 1986 and briefly served as a place of residence for himself, other members of his family and his bodyguards.


The Monaco building was targeted in an attack carried out by the rival Cali Cartel on Jan. 13, 1988, that left three dead and 10 injured.


Among the items discovered amid the rubble of the damaged building was Escobar’s collection of sports cars.


The capo abandoned the high-rise shortly after the attack and it was used in subsequent years to house, among other entities, the Colombian Attorney General’s Office’s Technical Investigation Team (CTI).


In the years since Escobar’s death in a shootout with police on Dec. 2, 1993, it has become a popular stop for visitors taking one of the city’s controversial “narco-tours.”