Caracas, Feb 24 (EFE).- Dawn broke on Sunday at the Simon Bolivar bridge, the main border crossing point between Colombia and Venezuela, amid a tense and uncertain calm after a clash between Venezuelans – many of them shouting and calling for their country’s “freedom” – who were trying to bring humanitarian aid into their country and authorities taking orders from Caracas.


On the order of Colombian President Ivan Duque, the bridge linking the Colombian city of Cucuta with Venezuela’s San Antonio del Tachira was closed for two days while the damage resulting from the failed aid delivery attempt is evaluated.


The area near the bridge was cordoned off and is being guarded by Colombian soldiers, police and some members of the Esmad anti-riot squadron.


In addition, the bridge is being blocked on the Venezuelan side by a tanker truck, with a number of masked men deployed in the area along the Tachira River on the Colombian side.


Venezuelan lawmaker Gaby Arellano said Sunday that smoke was still emanating from the two aid trucks that were set afire by the Bolivarian National Police.


Norte de Santander provincial Gov. William Villamizar told reporters that he hoped that the situation would normalize at the border crossing points, but that Colombia will continue to take care of Venezuelans who cannot return to their country.


The Venezuelan opposition, which does not recognize the new six-year term to which Nicolas Maduro was inaugurated on Jan. 10, said that the country is going through a “complex humanitarian emergency” and has asked for the international community to help deal with it.


It has been expected that aid donations would begin being ferried into Venezuela amid a huge citizen mobilization after pressure exerted by opposition leader and self-proclaimed Venezuelan President Juan Guaido, but the attempt was violently thwarted by Maduro’s military forces and police from the Venezuelan border towns.


The disturbances on Saturday – as Colombian Foreign Minister Carlos Holmes Trujillo said on Saturday evening – left 285 people injured, of whom 255 are Venezuelans and 30 are Colombians.


The majority of those people were affected by tear gas and by the use of “unconventional weapons” such as rubber bullets, birdshot and other anti-riot weaponry.


“In a single day, more than 120 officers, non-commissioned officers and soldiers of the FANB (Bolivarian National Armed Forces) of Venezuela placed themselves – on the orders of Juan Guaido – on the constitutional path to remove the dictator (Maduro) who abusively occupies Miraflores (presidential palace). The slogan: Liberate the Venezuelan people and return democracy to them,” said Ramirez, who accompanied Duque on a Sunday tour of the Francisco de Paula Santander and Simon Bolivar border bridges.


Also on Sunday, four Colombian consuls returned from Venezuela after Colombian President Ivan Duque ordered them back home after Maduro decided to break “all relations” with the neighboring country. 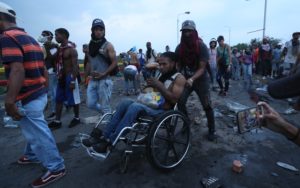 Migracion Colombia, the country’s immigration authority, reported the returns in a communique at 11:22 am stating that the diplomats posted to the Venezuelan cities of San Cristobal, San Antonio, Puerto Ayacucho and San Carlos del Zulia arrived via different border crossing points.


Meanwhile, the head of the parliamentary committee responsible for humanitarian aid, Miguel Pizarro, said Sunday that some 50 tons of aid entered the country “through other avenues” after being blocked at the Brazil-Venezuela border.


“The cargos that were on the border were guarded at their collection centers, a part of the cargos also entered by other avenues and during the week we’ll be showing part of that result and where the aid will be delivered and who will be the beneficiaries,” said Pizarro at a press conference.


Also on Sunday, Guaido arrived in Bogota to participate in the Group of Lima conference on the Venezuelan crisis.


“We’re arriving in … Bogota today to attend (on Monday) the Group of Lima summit with presidents from the region and the vice president of the United States (Mike Pence),” said Guaido at the El Dorado international airport.


Guaido also thanked Colombian Foreign Minister Holmes Trujillo, who welcomed him at the airport, for “all the efforts he has made for his Venezuelan brothers” and he emphasized the “leadership in favor of democracy in the region” displayed by Colombian President Ivan Duque.


In Miami, a group of Cuban, Venezuelan and Nicaraguan exile organizations publicly backed international military intervention in Venezuela to ensure that the humanitarian aid gets to the people.


The organizations, who gathered at the Miami City Hall, expressed their support for freedom for the three countries, as well as the “criminal trial of Raul Castro,” contending that the former Cuban president was, in large part, responsible for the situation in Venezuela. 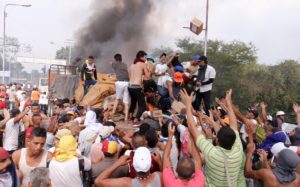 Venezuelan National Assembly oversight committee chairman Freddy Superlano, who was in the Colombian border city of Cucuta to help oversee humanitarian aid shipments into Venezuela, was poisoned along with his cousin, Carlos Salinas, who died, the lawmaker’s press office said Sunday.


“In the city of #cucuta Cong. @freddysuperlano and his cousin Carlos Salinas were poisoned and Carlos died, the Cong. is stable, let us pray for his quick recovery,” the lawmaker’s press aides said in a Twitter post.


The Voluntad Popular (VP) party, of which Superlano is a member, said in a post on the same social network that the lawmaker was poisoned with scopolamine, a drug used to treat nausea and motion sickness.


Salinas, who also belonged to the VP, “did not tolerate” the drug and “died from poisoning.”


VP, a party founded by jailed opposition leader Leopoldo Lopez, is the party of Guaido, who proclaimed himself interim president on Jan. 23.


Around 50 countries, including Brazil, Colombia and the United States, recognize Guaido as the interim president of Venezuela, an oil-rich country that is facing severe shortages of basic goods and is racked by hyperinflation.


Superlano said last Thursday that he planned to travel to Cucuta to help oversee the humanitarian aid shipments.


The lawmaker has investigated corruption cases involving members of Maduro’s administration that centered on kickbacks from Brazilian construction giant Odebrecht, diversion of foreign exchange and irregularities in the subsidized food program launched by the president.


The European Union on Sunday denounced attempts to prevent the delivery of humanitarian aid to crisis-gripped Venezuela and called for the Latin American country’s security forces to refrain from the use of force following deadly clashes at the borders with Brazil and Colombia.


The EU’s high representative for foreign affairs and security policy, Federica Mogherini, said in a statement that tensions were escalating in the nation as a result of the regime’s refusal “to recognize the humanitarian emergency.”


“We strongly call on law enforcement and security bodies to show restraint, avoid use of force and allow for the entry of aid,” Mogherini’s statement said.


She warned that an increasing number of Venezuelan citizens were being impacted by worsening living conditions due to the “multidimensional crisis” affecting the country.


She said reports of “unrest, acts of violence and a growing number of victims, in particular in the border areas” were “worrying.”


“We repudiate the use of irregular armed groups to intimidate civilians and lawmakers who have mobilized to distribute assistance,” the EU statement said.