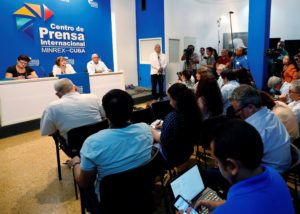 The vote in favor of the new charter was 86.8 percent, while 9 percent voted “no” and 4.1 percent left their ballots blank, she said.

Declining to comment on the result, Balseiro said that from the perspective of the CEN, the referendum was “very satisfactory” as an electoral exercise.

Asked why Cubans living abroad were not allowed to vote despite their having been included in the consultative process ahead of the drafting of the new constitution, she said that the CEN’s responsibility was to abide by the law.

“The Electoral Law establishes some prerequisites for the right to vote that do not correspond to those of popular consultation,” Balseiro said, mentioning the two-year residency requirement for voting.

The new charter will replace the one enacted in 1976 under the late Fidel Castro.

Some 9 million Cubans – including expats – took part in the consultations to develop a new constitution in a process launched by Raul Castro, who succeeded older brother Fidel as president in 2008.

The first draft of the new charter omitted the reference to communism embedded in the 1976 constitution, which proclaimed the Communist Party to be “the superior leading force of the society and the State, organizing and guiding the common efforts aimed at the highest goals of the construction of socialism and advancement toward the communist society.”

Subsequently, the phrase “the human being reaches his full dignity only in socialism and communism” was added to the preamble of the 2019 document.

While the new constitution does not envision political changes such as ending the monopoly of the Communist Party, it recognizes private property and the importance of foreign investment and establishes a new post of prime minister.

The text also codifies the precedent set by Raul Castro in limiting himself to two five-year terms.