On Monday night, legendary singer Raphael entertained fans with his romantic ballads and took over the festival for almost two hours, performing his greatest hits as the audience cheered.


For his sixth time performing at the Quinta Vergara, where the festival is staged, the 75-year-old Spanish artist sang with 70 members of the Chilean Philharmonic Orchestra, which played on his album, “ReSinphonico,” released two months ago. 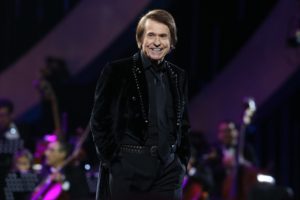 With a new sound that includes an electronic beat, wind instruments, strings and percussion, Raphael, known as “Er Niño” in Chile, played before thousands of people, who sang along from the first song, “Promesas,” to the last, “Que vuelva.”


In spite of his age, Raphael danced to the rhythm of the upbeat songs, such as “Mi gran noche” and “Digan lo que digan,” delighting his fans, who danced and sang to every tune.


The singer received a symbolic uranium record in 1982 for selling more than 50 million records in his musical career, a unique award that was also given to Michael Jackson and Queen, and he won over the crowd this year with a cover of “Gracias a la Vida,” the classic by Chilean singer-songwriter Violeta Parra.


The high point of the night was when the artist sang “Escandalo,” making the crowd go crazy when he ended the song by directing the orchestra.


The musicians who accompanied Raphael on Monday had only one day to rehearse for the concert; however, if the host had not mentioned this, the lack of preparation would have gone unnoticed, thanks to the chemistry between the performers.


Raphael was moved by the crowd as he sang “Estuve enamorado de ti” and “No sabe nadie.”


“As long as I can, I will be here to sing the songs that we have all had in our hearts for years,” the singer said before ending the night before an audience that did not want him to leave the stage.


He ended the concert with the songs “Yo soy aquel” and “Como yo te amo,” saying goodbye to the stage at the Quinta Vergara theater, which holds 15,000 people.


The Chilean music festival is considered one of the most important in Latin America and one of the longest in the world.


The 60th Viña del Mar International Song Festival opened on Sunday and will end on Friday.