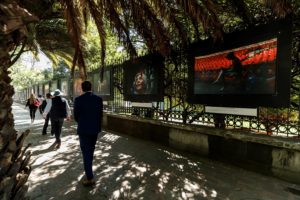 “The time of women has come to this city,” the municipal secretary of women’s affairs, Gabriela Ramirez, said during the inauguration of the exhibits.
Across 10 days, from March 8 to March 17, 790 artists will take part in 150 events at 27 venues.

While the situation for women has changed since the first International Woman’s Day in 1910, “more than half” of women still lack access to certain opportunities and to full human rights, Mexico City’s director of heritage, Maria Guadalupe Lozada, said.

To remedy that deficiency represents “a challenge for the country and for the city,” she said.

The objective of the photojournalism exhibition is for “people to know what we are doing every day,” EFE photographer and event organizer Sashenka Gutierrez said.

The idea for the show emerged from a gathering in the Mexico City neighborhood of Coyoacan and a committee was formed to solicit entries.
Organizers expected interest in the project to be limited, committee member Jasmin Ortega said, but more than 60 women photojournalists submitted examples of their work for display along the railing of Chapultepec park.

Some of the photos included date from 40 years ago.

“We see each other on the street and we recognize each other. Together we make a 12-hour shift into something fun and we can tell the story of this country,” Ortega said. “We exhibit on the street because that is where we create our visual discourse and where we suffer discrimination.”

In today’s Mexico, where violence against journalists is reaching an unprecedented level, women in journalism are a particularly vulnerable group.
Women journalists are “starting to notice the micro-aggressions” they must combat, another member of the group, Monica Gonzalez, told EFE.

Inspired by novelist Virginia Woolf’s “A Room of One’s Own,” the aim of the exhibition is to insist on women’s right to a private space where they can create, according to Rossana Cervantes of the ComuArte collective.