The collision occurred during the morning rush hour at San Cristovao station, located on the north side of Rio de Janeiro.


The fatality was the driver of one of the trains.


It took a dozen firefighters seven hours to reach the driver under the wreckage and efforts to resuscitate him were unsuccessful. 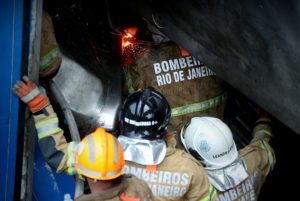 Seven of the eight people taken to Rio hospitals with injuries have already been treated and released, while the one person who remains hospitalized is listed as stable.


The company that operates the metropolitan area’s commuter rail network, SuperVia, expressed regret over the accident and said that an investigation to determine the cause was already under way.


“We are providing support to resolve the situation as quickly as possible,” the company said on social media.


One of the passengers, Dr. Eveline Otaviano, said in comments posted on the news Web site G1 said that accidents were to be expected given the poor condition of the trains.


“It was a tragedy foreseen, because of the precarious state of oversight, maintenance, perhaps even the signaling equipment,” she said.

“Unfortunately, a situation of this magnitude, with victims, needs to occur for SuperVia to mobilize.”


The Rio passenger rail network has been plagued by accidents in recent years, including a 2015 crash that left more than 200 people injured.


Thousands depend on the commuter trains to reach their jobs in the city and the system faces even greater demands in February and March, when both domestic and international tourists flock to Rio de Janeiro for Carnival.


The commuter network is especially important to residents of poor suburbs in the Baixada Fluminense area, north of the city.


Public transportation has long been a headache in Rio de Janeiro, despite substantial investment in infrastructure as the city prepared to host the 2014 World Cup and the 2016 Olympics.


Efforts to improve the transit system largely remain on hold due to the financial straits the municipal administration and the Rio de Janeiro state government have been in for the last five years.