Chicago, United States, Mar 3 (EFE).- Independent senator Bernie Sanders on Sunday made a passionate bid to win the Democratic nomination for president and promised a fight against racial and economic injustices in the United States if he is elected in 2020.


Addressing thousands of his supporters who frequently roared in applause during his some 40 minutes of speech at the Navy Pier’s Festival Hall in Chicago, 77-year-old Sanders said his second presidential bid would finish the political revolution that began in 2016.


“We have got to do it together by the millions. We are going to finally… create an economy and government that works for all and not just the one person,” the Vermont senator said.


“Together we are going to create a political system which is based on the democratic principle of one person, one vote, and end a corrupt political system in which billionaires are buying elections,” he said. 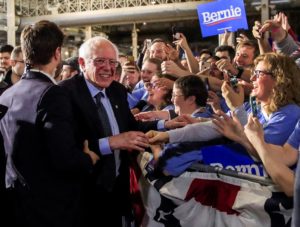 Sanders said his struggle was not “just about defeating Donald Trump” but to trounce crony capitalism by taking on the “incredibly powerful institutions that control the economic and political life of our country.”


“Today, I want to welcome you to a campaign which says loudly and proudly that the underlying principles of our government will not be greed, kleptocracy, hatred, authoritarianism and pathological lying,” he said.


Sanders, in his no-holds-barred speech, said his campaign was to tell corporate America, the billionaire class and other powerful special interests “who control so much of our economic and political life that we will no longer tolerate their insatiable greed.”


He said this greed had resulted in the US having more income and wealth inequality than any other major country in the world.


Sanders pointed out that this was not talked about too much in Congress or in the media “but in my view we can no longer stand idly by and allow three families in this country to own more wealth than the bottom half of America.”


He reiterated his vow to raise the minimum wage to $15 an hour and asked American companies like “WalMart, and the fast food industry and other low-wage employers” that they should stop paying workers “starvation wages.”


In a bid to win over black voters, Sanders noted that the US still had a long way to go to end institutional racism and income disparities in a country where the average black family has one-10th the wealth of the average white family.


“Have we made progress in civil rights in this country since the early 1960s when I lived here? No question about it. Do we still have a long way to go to end the institutional racism which permeates almost every aspect of our society? Absolutely,” he said.


Sanders, who competed for the Democratic presidential nomination in the 2016 primaries, which were won by Hillary Clinton, began his second campaign this Saturday in New York where he addressed thousands of followers and vowed to defeat Trump, describing him a very dangerous for the nation.