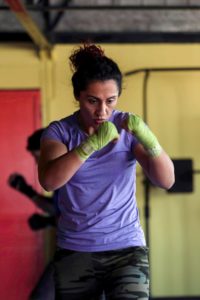 Santiago, Mar 3 (EFE).- Three years ago, maternity took from Chilean boxer Carolina “Krespita” Rodriguez what no other woman had been able to achieve in the ring: the world bantamweight title.


Now, however, she has decided to take back the title and show the world that they were wrong when they thought her career was over, and the upcoming battle – she hopes – will set an example for her daughter Megan, namely because she doesn’t want to have to tell her, later in life, that she gave up her dreams for her.


Krespita is currently a champion “on hold,” a term that is applied to boxers who cannot adhere to the schedule of bouts required to defend their title and have to drop out of competition, but it allows them to challenge the “interim champion” without having to go through the entire set of fights that otherwise would be required to vie for the title.


That is Krespita’s goal, but to accomplish it she has to fight “many more battles outside the ring” than within it, she told EFE, devoting a large part of her time to “obtaining sponsorships and sponsors, as well as financing the trips and paying the fighters, judges and referees.”


It was like that in all of her fights, including her latest one, in which she battled Japan’s Tenkai Tsunami for the International Boxing Federation world bantamweight title, defeating her in Antofagasta, Chile, in 2015.

“That was the peak of my athletic career. I won and defended the titles of the Women’s International Boxing Association and the IBF. The next step was to compete for the other two (titles) from the other organizations, so that I would have all of them in the category,” she said.


But then Megan came along. At first, Krespita felt more “frozen” than “happy or sad,” she said, because although “it was a shock” she had never ruled out the possibility of becoming a mother.


However, the arrival of her little one also coincided with a “bad time” in her life, at which she admitted that she came “to hate what I was doing” and to feel “the responsibility of always winning” or else losing the support that it had cost her “so much to get.”


Despite that situation, Krespita – who was born in 1983 – decided “to have the experience of being a mother,” all the while convinced that “children choose their parents, and not the other way around,” but always with the idea of returning to the ring.


“I wasn’t like other mothers, (who) all day are focused on their belly and thinking of (baby) names. Then, (Megan) was born and she completely changed my life. The only think I was interested in was being with her,” Krespita said.


She took her savings, cut her ties with her former partner and agent, with whom she had worked closely both in the gym and the business side of her career, and devoted herself body and soul to Megan for almost three years.


It was a period that helped her “grow as a person” and to get back in touch with herself and with her passion for boxing, which she returned to little by little, facing the additional challenges of having “one more mouth to feed.”


“It takes a lot to get back to the discipline, above all with the exhaustion, which – at that time – meant nursing (Megan) or sleeping with her, which … injured me due to bad posture. All of that while I was trying to give her quality time, not being an absentee mother,” she said.


It was a task that she said she accomplished with the support of her family, without which she said she doubted “I would have returned to boxing.” 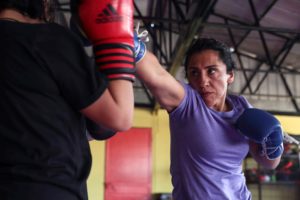 “It’s very well-established that the mom has to be with the baby. If that’s not the case and you decide to achieve your dream, you’re a bad mother. But it’s never factored in that the responsibility also rests with the father,” she continued.


Little by little, Krespita began to enjoy the training sessions until on March 24, 2018, 944 days after her last fight, she returned to the ring and defeated Venezuela’s Carolina Alvarez with newly developed techniques and strategies that showed that her abilities were not only intact but had improved.


“They told me that it would go badly, that it would be a disaster and I shut their mouths. Because I came out very quickly, very strongly, very decisively. Just the opposite,” she emphasized.


With the win, which put her record at 16-0, Krespita is once again in the limelight in her homeland, where in 2010 she made a huge splash by becoming the first female boxer to compete professionally.


Now, however, her aim is to recover the world title, although her next bout has not yet been definitively scheduled.


But in approaching that campaign, the challenge is to impart to Megan the values that boxing has taught her and to show her that you can dream of being whatever you want to be.


“I want her to think of boxing as something natural and to learn to defend herself, not to pay attention when they say that it’s a man’s thing … It’s merely a sport and strength is not in your muscles, but rather in your head,” Krespita said.