Miami, USA, Mar 4 (EFE).- Actors get better as they get older and that should translate into more work and more roles, says American actress Patricia Clarkson, who received the Precious Gem award on Monday at the Miami International Film Festival (MIFF) for a television and film career spanning more than 30 years.

In a wide-ranging interview with EFE in which she spoke about women’s role in politics and public offices, women’s rights in the film industry, Clarkson, a daughter of a politician mother, also said she wasn’t prepared as yet to get involved in politics.

Born in 1959 in New Orleans, United States, Clarkson was the main celebrity at the 36th edition of the Miami festival that kicked off on Friday and will conclude on Mar. 11, during which 160 movies will be screened.

The actress, who won a Golden Globe for her work in HBO series “Sharp Objects” (2018), received the Estrella Damm Precious Gem Award at the ceremony held in the historic Tower Theater of Miami’s Little Havana.

The ceremony ended with the screening of “The Party” – a film by Sally Potter, starring Clarkson and Kristin Scott Thomas.

The popular supporting actress, who guest-starred on the American political thriller series “House of Cards”, will be turning 60 this December.

Talking to EFE, she reflected on how many women of her generation come across difficulties related to aging as after a certain age directors stop calling. 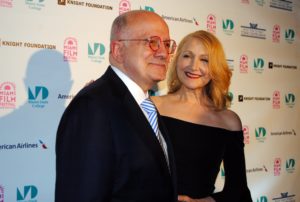 But she still expressed optimism regarding her future, saying, “The best part of our acting is that we get better as we age, so we should work more”, and that things were changing in the entertainment industry.

Clarkson said it was “very important” to have feminist platforms in Hollywood to protect the rights of women in the film industry.

“It (the situation) is finally changing, and it’s shifting, and it’s good,” said Clarkson during the festival which kicked off with “This Changes Everything,” a documentary on gender disparity in Hollywood.

The actress, who made her debut in 1987 in the feature film “The Untouchables” by Brian de Palma, spoke about movements such as “Me Too” that went viral across the world after actresses started coming out with their experiences of sexual harassment.

Nominated for an Oscar for her work in “Pieces of April” by Peter Hedges, and two-time Emmy winner for “Six Feet Under” by Alan Ball, Clarkson has carved a niche for herself working with big studios as well as in independent productions.

She has worked with renowned names such as Martin Scorsese, Brian de Palma and Clint Eastwood, as well as Tom McCarthy, Todd Haynes and Isabel Coixet.

She was also a part of the ensemble of adventure and science fiction trilogy “The Maze Runner,” based on novels by the same name by American writer James Dashner.

Although her mother was involved in politics, Clarkson felt she is not prepared for a similar role, especially since she has worked all her life to build her career as an actress.

“I don’t think, you know, being political it has to be in your blood, and it’s somewhat in my blood. But being an actress is who I’ve been all my life,” Clarkson said.

However, she said she was happy to see more women in public posts in the United States in recent years, and was convinced that this trend was going to increase.

“Yes, we need as many women as we can put because we’ve let men do a lot for a long time and it’s not working.”
She said she was honored to receive the award presented to her at the iconic Tower Theater at Miami.

This was not Clarkson’s first time at the MIFF. In 2007, she was present at the premiere of “Married Life”, directed by Ira Sachs.

She also confirmed she was going to feature in “Light on Broken Glass” by Spanish director Isabel Coixet, with whom she has earlier worked in “Elegy” (2008), “Learning to Drive” (2014) and “The Bookshop” (2017).