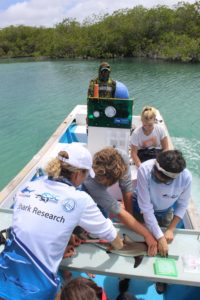 
Twelve acoustic transmitters in the waters off San Cristobal Island’s Puerto Grande Beach will be in charge of gathering information about how the marine reserve protects them during the first months of their lives and during their migrations.


To that end, dozens of hammerhead sharks, an endangered species according to the International Union for the Conservation of Nature, and of blacktip reef sharks, have been “branded” with electronic devices.


“We can learn whether sharks go to other countries, because this system can transmit from other places. What’s interesting is that now we’re studying the newborns, because previously we could only do it with adults,” the head of the marine ecosystems monitoring program of the Galapagos National Park Administration, Eduardo Espinosa, told EFE.


Located at some 1,000km (620 mi) west of the Ecuadorian coast, the Galapagos are a living laboratory for biodiversity research.


The study, being done by San Francisco University of Quito and the Galapagos Science Center in collaboration with the park administration, seeks to find out how the two species coexist.


In a statement to EFE, researcher Alex Hearn said that many sharks come close to the shoreline and later “the babies grow up among the mangrove swamps and coastal lagoons until they reach a certain size.”


That is the case of Puerto Grande, where shark pups hide from predators in the depths of its bay.


By means of acoustic signals picked up, they can be located and their movements in the bay studied during the season when the greatest number of newborn sharks are in the archipelago.


“We want to know why they’re concentrated there and if the place has certain special characteristics that favor their reproduction and the first months of their development,” Espinosa said.


Though this research has been underway for several years, now in 2019 it has, for the first time, a team based on San Cristobal, which began studying the sharks’ migratory movements when there were very few examples there, and has reported an increase in the number of pups since February.


“This year, the study has made a substantial leap forward. Over the last three to four years we monitored four or five areas that we thought were breeding grounds, but now we’re expanding that – we have eight sites besides those we monitor with a drone, which makes 24 in all,” Hearn said.


All that with the idea of predicting where more breeding grounds might be found around other islands of the archipelago.


At the same time the researchers try to determine whether these females are the same ones returning year after year to the Galapagos, as well as how the two species share the space and “their levels of stress, growth and mortality.”


The research, based on the hypothesis that sharks compete with each other for space, will explain “what the spatial division is like, and if it exists.”


Another objective is to make a population estimate for both species found at Puerto Grande.


“At any rate, for the blacktip reef shark we’re talking about hundreds and hundreds of examples. The hammerhead no, there are fewer where we are,” Hearn said.