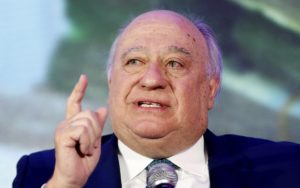 Caracas, Mar 7 (EFE).- The top envoy to Colombia of Venezuela’s self-proclaimed interim president on Thursday rejected the possibility of a Colombian military intervention in the neighboring country.


“The last thing you want to see is a Colombian military incursion … in Venezuela. That would mark us for the rest of our days. So you have to manage these things with a lot of prudence,” Humberto Calderon Berti said at the “What Will Happen in Venezuela?” forum, organized by Colombian weekly magazine Semana.


“We’re in this neighborhood and we can’t move away. Everything we do much be done with extreme prudence,” he said.
Calderon said his calls for caution have prompted “attacks from radicals,” who call him an “old dinosaur” when he expresses opposition to potential military action.


Juan Guaido, the speaker of Venezuela’s opposition-controlled but toothless National Assembly (unicameral legislature), declared himself that country’s interim president in late January, saying that leftist head of state Nicolas Maduro’s re-election victory in May 2018 was fraudulent.


Around 50 countries, including the United States, Germany, the United Kingdom, Colombia and Brazil, recognize Guaido as acting president and are calling for new presidential balloting.


Russia, China and India are among the dozens of nations that still regard Maduro as the legitimate president of the South American nation.
Asked about what has happened with Venezuela’s embassy building in Bogota after Maduro’s move late last month to sever ties with Colombia, Calderon said it is now completely empty.


Maduro broke off bilateral ties amid a row over the opposition’s unsuccessful attempt to bring in tons of humanitarian aid.


Venezuela’s government has refused to accept that assistance, saying it is a Trojan horse and that he would be paving the way for a US-led military intervention if he did not use his army to block it from entering from Colombia and Brazil.


Calderon said his duties as Guaido’s envoy to Colombia include extending a hand to Venezuelans living there. 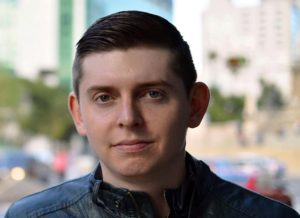 He also expressed concern for unaccompanied children who have crossed the border, as well as the situation of kids who were born in Colombia to undocumented parents and who “aren’t Colombians and aren’t Venezuelans.”


Venezuela, which has been racked in recent years by food and medicine shortages and hyperinflation, has seen the exodus of millions of its citizens, an estimated 1.17 million of whom have settled in Colombia.


Maduro’s critics say the country’s economic woes are the result of socialist policies dating back to his late political mentor and predecessor, Hugo Chavez, who was Venezuela’s president from 1999 until his death from cancer in 2013.


Venezuela’s government, however, says the oil-rich country’s problems stem from economic warfare by the US, which recently imposed oil sanctions aimed at denying Maduro access to his main source of hard currency.


Asked for his solution to the standoff in his homeland, Calderon said he hoped for a “peaceful transition” but that resolving the crisis through snap elections (the next presidential balloting is scheduled for 2024), as Guaido has proposed, will not be a simple matter and will take time.


Thousands of people are relying on illegal smugglers’ routes across the Tachira River to traverse the Venezuela-Colombia border, which was closed late last month amid a row over humanitarian aid.


But that official route is currently off-limits.


On Feb. 23, amid failed attempts by his political enemies to move tons of humanitarian aid across the border from Colombia, Maduro announced the severing of ties with the neighboring country and the closure of the border crossings leading to the northeastern Colombian province of Norte de Santander.


Maduro had earlier shut Venezuela’s border with Brazil, where other humanitarian aid had been stockpiled.


The closure of the border with Colombia affected thousands of Venezuelans who see Cucuta as an oasis in the middle of a desert of scarcity in their homeland, which is suffering from shortages of food and medicine and hyperinflation.


Desperate to get across, they are now relying on “trochas” – illegal trails normally used by smugglers and drug traffickers – to get across the shallow Tachira River that divides the two countries. 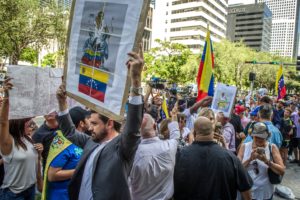 Narrow rock paths on the river bed are now serving as bridges for large numbers of people who walk under a relentless sun while carrying suitcases, sacks and bags filled with products they can’t find in Venezuela.


The blackout began at 5 pm and was immediately reported by social network users in the states of Carabobo, Miranda, Barquisimeto, Tachira, Cojedes, Merida, Barinas, Vargas, Nueva Esparta, Aragua and Zulia.


In Caracas, EFE determined that the metro service – which is vital given that other public transportation services have virtually collapsed – was suspended due to the power outage, which forced thousands of passengers to walk long distances to get to their destinations.


The state-run National Electricity Corporation (Corpoelec) said on Twitter that the network was sabotaged at the Guri installation, the most important facility in the system, calling the blackout “part of the electric war against the state. … We’re working to restore service.”


In Washington, a group of 24 US senators on Thursday urged President Donald Trump to approve immigration protection known as Temporary Protected Status for Venezuelans given the “humanitarian crisis” in that country.


The lawmakers, in a letter sent on Thursday to Trump, said that declaring TPS for Venezuelans would be a concrete way that the US administration could immediately alleviate the suffering of innocent civilians caught up amid the South American country’s political, economic and social turmoil.


TPS would allow thousands of Venezuelans to live and work legally in the US and would be a demonstration of US commitment to support a “democratic transition” in Venezuela, the lawmakers said.


Also on Thursday, Cody Weddle, the Miami television reporter who was arrested on Wednesday in Caracas by Venezuelan counterintelligence personnel, arrived back in Miami.


Weddle arrived at the Miami airport on board a commercial flight after DGCIM military counterintelligence officials raided his home early Wednesday and took him in for questioning.


Arrested along with Weddle was his Venezuelan assistant Carlos Camacho, who was also released on Wednesday by Venezuelan authorities.
Weddle, an independent reporter, has been living in Caracas since 2014 and working for Miami’s WPLG Local 10 television to report on the South American country’s crisis.


Moreover, on Thursday the US government sent more medical supplies to the Colombian city of Cucuta, where humanitarian aid for Venezuela is being stockpiled, including masks, gloves, hygiene products and hospital gowns. The new aid shipment is designated for hospitals and clinics that are treating migrants and refugees coming from Venezuela.


The aid was shipped from Florida on heavy military transport aircraft, specifically Boeing C-17 Globemaster IIIs, which were put into service by the US Air Force during the 1980s and 1990s.


In a hearing before a US Senate committee, USAID director Mark Green said on Thursday that the collapse of the Venezuelan healthcare infrastructure has resulted in outbreaks of disease in that country, and those illnesses are spreading in the region.


The Red Cross has issued an alert about the state of health of the Venezuelans who are crossing the border into Colombia, noting that cases of diphtheria and measles have been detected, illnesses for which children should have been immunized according to routine vaccination schedules in Venezuela.