“At this time, almost all the electric energy supply has been restored throughout the national territory,” Rodriguez told reporters.

The minister called the power restoration a “victory” in the face of what he and the Nicolas Maduro government claim to be a “terrorist attack” perpetrated by the United States on the “distribution system” and the “brain” of Venezuela’s electricity grid.

However, he called upon the public to remain alert because, he said, the “electric war” continues.

The Maduro regime had said last week that the electricity distribution system had been sabotaged and was the target of a cyber-attack by the US, the target being the country’s main Guri hydroelectric facility in southern Bolivar state.

Restoring electric service has been overseen by Maduro, who has been monitoring developments from a “situation room,” according to what Rodriguez said on Tuesday, along with workers from the state-run electric company Corpoelec. 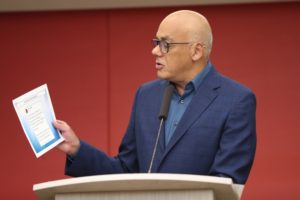 Because of the power outage, the supply of potable water across much of the country was also affected, although now that power has ostensibly been “almost fully” restored the water pumping systems are operating again.

Last Thursday, Venezuela experienced a massive power blackout that paralyzed the country, and the government suspended work and school classes, with communications and transportation services also being severely affected.

The blackout resulted in about a dozen states being completely without electricity, and looting occurred in the states of Zulia and Merida, while the NGO Doctors Health Organization reported that several hospitals had been significantly affected, resulting in at least 21 deaths.

Venezuela has been experiencing power failures for years but they have become more serious recently and the one that hit the country last Thursday was by far the longest in history.

The political crisis in Venezuela intensified on Jan. 23 when the head of the opposition-controlled Parliament, Juan Guaido, proclaimed himself the country’s interim president and received the support of a majority of countries in the Western Hemisphere as well some 20 countries in Europe.

The Venezuelan opposition, which does not recognize Maduro’s second six-year term in office, which began on Jan. 10, says that the country is going through a “complicated humanitarian emergency” – including a severe lack of both food and medicine – and has asked for the international community’s help in dealing with it.