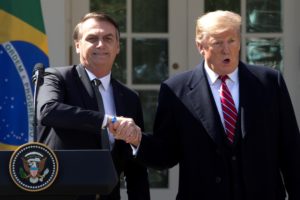 Caracas, Mar 19 (EFE).- Venezuela’s Bolivarian National Police on Tuesday prevented public workers supporting the head of Parliament, Juan Guaido, as interim president from marching to the legislative seat to demand that lawmakers approve a bill to “protect” workers who “defend” democracy.
Plans were for the march to head along a west-central Caracas avenue to Parliament, but the workers could not even gather at the staging area, Morelos Square, because it had been cordoned off by police.

A workers committee, however, did manage to get to the legislature and delivered a document demanding that the bill they have dubbed the “labor guarantee law” be approved by lawmakers.

The bill provides “protection for all workers who at some time go out to defend democracy, … to defend the institutions,” the general secretary of the Venezuelan Workers Confederation (CTV), Jose Elias Torres, told reporters.

He also said that the bill seeks to protect the rights of workers against the possibility that the state might try to fire them “due to political discrimination.”

The workers are also demanding that Parliament designate who was responsible for the massive power blackout the country suffered 11 days ago and that lawmakers debate whether there is any basis for calling for an international trial.

In addition, they urged the legislature to demand that the commission sent to Venezuela by the United Nations Office of the High Commissioner for Human Rights meet with the workers.

Among the workers who had been intending to march were workers at the state-run Corpoelec electricity company, the Cantv communications station, the Foreign Ministry, the Social Security administration, the petroleum and university sectors.

Still full of Chavista paraphernalia, the Venezuelan consulate in New York is now in the hands of the head of the opposition-controlled Parliament, Juan Guaido, and his supporters, who are promising to reopen the facility as soon as possible so that their countrymen can “begin to return home.” 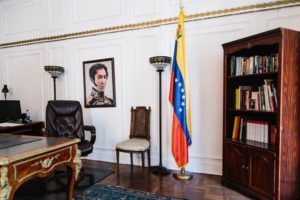 “We have begun the recovery of the assets of the Republic, assets that belong to all Venezuelans,” Gustavo Marcano, the No. 2 official in the delegation to the US named by Guaido and the head of the Monday operation to take over the consulate, said on Tuesday.

Less than 24 hours after taking control of the consulate, Marcano opened the building’s doors to a group of journalists to show them the conditions inside what many consider to be the “jewel in the crown” of Venezuelan diplomacy in the US.

The deterioration of some of the floors in the consulate, which for some time has been closed to the public, is evident, with wrecked and perforated ceilings and significant damage to walls and floors.

On other floors, in much better shape and filled with symbols of the Bolivarian Revolution, one can still see drinking glasses on the tables and personal items strewn around, as if people had left the facility in a great hurry.

According to Marcano, that is indeed more or less what occurred, given that the building was being “occupied” by “officials of the Nicolas Maduro regime.”

Those people were mainly, he said, personnel accredited to Venezuela’s mission to the United Nations, which remains in the control of the Maduro regime, although nobody was in the building when the diplomat and his team broke the locks on Monday afternoon.

Marcano, an opposition figure who previously served as a city mayor and lawmaker, insisted that the recovery of the consulate was “absolutely according to the laws.”

At present, Guaido’s representatives are focusing on taking an “inventory” of everything that they are finding inside the consulate, including the diplomatic pouch, computers and other materials with an eye toward preparing a report that they are intending to make public. 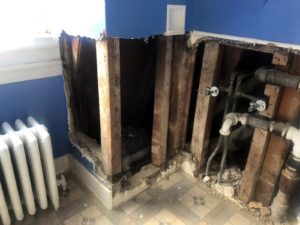 “There could be items of a criminal nature – that wouldn’t surprise us,” said Marcano, who also wants to assess the damage caused to state properties, including works of art that he and his colleagues say were removed to make room for portraits of the late Hugo Chavez and Maduro.

According to Marcano, the facility will soon be “free of any kind of political propaganda.”

The downtown Manhattan consulate – a six-story building valued at millions of dollars – is a symbol for Guaido, since it is the most important diplomatic facility he controls in the US and, in contrast to others, it remains the property of the Venezuelan state.

The intention of the new landlords is to reopen the consulate within several weeks and to start providing services to Venezuelans.

The first step, they said, will be to begin registering all the Venezuelans who are in the US and to listen to their concerns.

Brazilian President Jair Bolsonaro on Tuesday refused to rule out supporting a potential US intervention in Venezuela after his US host and counterpart, Donald Trump, said that at their White House meeting the pair were keeping “all options … on the table” and threatened to tighten sanctions against Caracas.

Saying that he thought he could speak for both the US and Brazil, Trump remarked that “all options are on the table” during his meeting with Bolsonaro.

Trump was responding to a reporter’s question about whether he wanted Brazil to involve itself in a potential US military intervention in Venezuela, despite the fact that Brazilian Vice president Hamilton Mourao said in February that “the military option (has) never (been) an option” for Brasilia.

“There are some issues that, if you talk about them, they’re no longer strategic … It’s a question of strategy. Everything that we discuss here (in private) we will carry out, but you don’t talk about some possibilities in public,” Bolsonaro said. 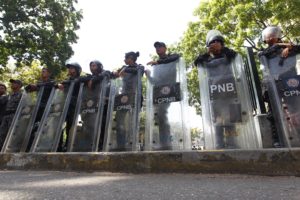 Trump took advantage of the press conference to ask the Venezuelan armed forces to shift their loyalty from President Nicolas Maduro, whom he called nothing more than a “Cuban puppet,” to self-proclaimed interim President Juan Guaido, adding that “Brazil has been an extraordinary leader in supporting the Venezuelan people’s efforts to reclaim their liberty and their democracy.”

The US president did not predict how much time will pass, in his judgment, before Nicolas Maduro is no longer Venezuela’s president, but he expressed the opinion that “change” will be coming.

Trump warned that the US still had not levied really tough sanctions on the Maduro regime, saying “we can go a lot tougher if we need to do that,” and noting that Washington has imposed only moderate restrictions so far on Caracas.

The US president also emphasized that he knows “exactly” what he wants to happen in Venezuela from this point forward, but he did not specify what that might be.

He said at the beginning of his meeting with Bolsonaro that what is happening in Venezuela right now – the death, destruction and hunger – is a shame, adding that it is difficult to believe that one of the world’s richest countries is now one of the poorest.

And in Caracas, some portions of the capital and nearby Miranda state suffered a new power outage on Tuesday, less than two week after a massive blackout left almost the entire country in the dark.

The power failure affected mainly eastern Caracas, but there were also some reports of outages in the western part of the city.

The state-run Corpoelec electricity company said on its Twitter account that it was trying to restore service in the Santa Rosa A4 circuit, without providing further details.

The outage shut down two stretches of the Caracas Metro, which moves millions of people around the city each day.

The new blackout also affected part of Miranda state, specifically the Caracas satellite cities of Guarenas and Guatire and the resort city of Higuerote located some 120 km (75 mi.) from the capital, according to various reports.