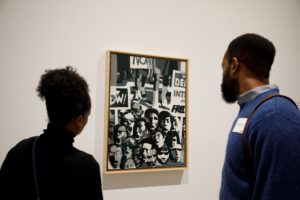 Los Angeles, USA, Mar 20 (EFE).- The cultural legacy left behind by the protests and demands of “black power” is the protagonist of “Soul of a Nation”, a multidisciplinary exhibition in The Broad of Los Angeles museum, which follows the traces of African-American art between 1963 and 1983.

The Broad, one of the great references of art in the Californian city, presented this ambitious show to the media on Wednesday, which was originally organized by the Tate Modern gallery in London and that will remain open in Los Angeles from Mar. 23 until Sep. 1.

With a wide range of more than 60 artists, this exhibition explores “the vital contribution of Black artists made over two revolutionary decades in American history, beginning in 1963 at the height of the civil rights movement,” said the director of The Broad, Joanne Heyler.

The exhibition tries to lay out the complexity of the African-American manifestations, instead of showing them as a uniform set of works, and also suggests some of their internal arguments and internal contradictions.

“Soul of a Nation” tries to reflect the debates between abstraction and figurative art, between works only for African-Americans and works for the general public, and between openly political and belligerent works versus others with more evocative or conceptual meanings. 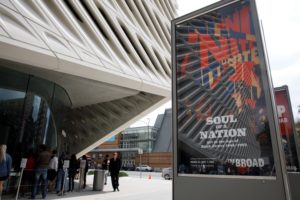 Zoe Whitley, a curator of Tate Modern said that Artist Romare Bearden was asked in 1972 how he would define black art and his answer to that question was the best she has ever heard. He said that black art is the art that black artists do. If you ask what white art is, the answers could be English painting, the German Renaissance, the Italian Renaissance and so on. Black art should be as difficult to define as that.

Not forgetting that black art resorted to the streets to avoid censorship in museums and galleries, especially through graffiti and murals, the exhibition also shows how they used and recycled afro iconography, the clenched fist, the American flag, slogans and chants of “black power”, or pop symbols like Superman.

“Soul of a Nation” also features numerous references to key events in the struggle for equality such as the 1963 March on Washington, the “Bloody Sunday” of the Selma marches in 1965, or the Watts riots in Los Angeles of the same year. 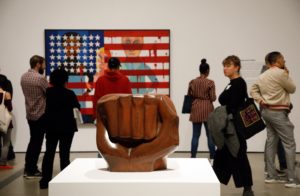 The Broad intends not only to remember the work of African-American artists but also to reclaim their validity in an era in which race has returned to the forefront of political and social debate in the United States.

Thus, the influence of black power can be found in the rap of Kendrick Lamar, in very diverse films such as “Black Panther” (2018) or “Get Out” (2017) and in movements such as Black Lives Matter.

But also, under the presidency of Donald Trump the extreme right and white supremacy have acquired a new impulse and gained more significance.

With all this in mind, Bridget R. Cooks, associate professor of African-American studies at the University of California Irvine, said Wednesday that these works are totally fresh, totally new and absolutely relevant and can serve to engage young people into the conversation about equality.

Cooks wanted “to ask you to think about the new generations. This is an opportunity to come and absorb the conversation about something that happened before they were born in 2004.”

“Let’s try to take them into the 1960s and 1980s not just with TV series but with the real people who were part of that movement,” she added.