The artist has been turning out sculptures made of Cotopaxi rock and cacti/bonsai flora for more than 25 years from a workshop on the south side of Quito.


With more than 100 pieces completed, Puetate told EFE that he hopes to conclude a deal which will see the municipal government commission miniatures of structures in Quito’s historic core, designated by UNESCO in 1978 as a World Heritage Site. 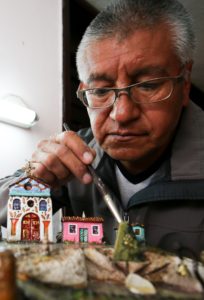 Yet Puetate devotes his working hours – usually from 3.00 am to 10.00 pm – not only to miniatures, but to his other passion: portrait painting.


“I started as a child and then continued polishing (my skills) at school. Practice is everything, that’s why I consider myself more self-taught than a student of different schools,” he said amid his rocks and brushes.


Puetate, a single father, says that being able to support himself and his children through the sale of his miniatures allows him “to investigate, discover, dive more into what art is.”


Besides the volcanic rock, his miniatures incorporate elements such as bells, nails, shells, mollusks and coral to recreate certain aspects that harmonize the piece or add detail, such as flowers, human figures, crosses and fountains.


The sculptor says that while any kind of rock can be suitable for his purposes, he decided to use volcanic stone or pumice because “it is soft and porous and can be carved to insert plants.”


And he favors stone from Cotopaxi because its dates back to the volcano’s earliest eruptions in the distant past.


But Puetate’s relationship with the stone goes beyond craft, as he perceives them as living things capable of conversation.


“Talking to them is part of the appreciation I have for them, the same way one does with a tree or a flower. For me, that they allow me to visualize those forms and make them a component of my work is something spiritual,” he says.


His sculptures have been well received at exhibitions, most recently at the Fruit and Flowers Festival in the city of Ambato, one of Ecuador’s most-colorful Carnival events.


Even so, Puetate thinks that people undervalue his pieces because of their size: “I believe there is a great mistake because people don’t stop to look beyond the point of seeing them as small, and to see that their greatness lies in their miniature size.”