Panama City, Mar 24 (EFE).- Four years ago La Joyita seemed to be more of a dump than a prison. The inmates in the Panamanian prison walked over and around mountains of garbage and rotten food and slept among rats and unearthly odors. Tired of such misery, a group of prisoners devised a recycling program that has revolutionized not only the prison but also their own lives.

“Here there are 25 pounds (11.3 kg), although remember to subtract the weight of the box,” a convict tells one of his fellow inmates as he removes from a worn scale a box full of crushed aluminum cans.

At one side of the main yard in the prison there is a sign made of plastic bottle tops designating the entrance to the recycling facility for the “Ecosolidos” (eco-solids) program, an innovative program that is being copied at other Panamanian prisons and is being participated in by some 600 inmates. 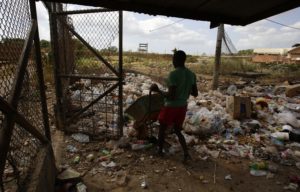 Organized in several work groups and in eight-hour daily shifts, the prisoners collect the trash, separate it by materials and take it to the recycling plant.

Metal and aluminum is crushed and stored so that the state can sell it, while organic waste is turned into fertilizer to be used in the prison’s garden. The prisoners make chairs and wastecans out of some of the materials.

Thanks to Ecosolidos, in which other countries in Central America have become interested, the prisoners manage to recycle 90 percent of the five tons of garbage that they generate each month.

“We’re saving the state money because they don’t have to come to collect our trash and we give it income because they sell the recyclable garbage. Don’t ask me what they do with that money,” Julio Rodriguez joked.

Rodriguez is one of the original members of the group that in 2015 considered and then moved forward with the idea first suggested by inmate Franklin Ayon, an environmental engineer who set to work to devise a way to clean up the trash at the prison.

“We don’t work with modern machinery. We use machines made by ourselves, it’s almost all manual. At first, we didn’t have gloves or masks, but we got support … from the International Red Cross,” said the prisoner, who is nearing release after serving an eight-year sentence for robbery.

The initiative, which allows the inmates to shave off a day of their sentences for every two days of work they contribute to the program, has adopted the common mantra of recycling, but has added another “R” – Reduce, recycle, reuse and resocialize.

The deputy director of Panama’s prison system, Sharon Diaz, told EFE that Ecosolidos has created an environmental awareness among the prisoners and has helped them to strengthen their “sense of responsibility,” given that the majority of them barely had any kind of routine or schedule in their lives before being imprisoned.

The program has also improved their hygiene and their state of mind. Central American prisons are, in general, far from being a cakewalk but for the inmates the situation in La Joyita some years ago surpassed – in a negative way – all other facilities. 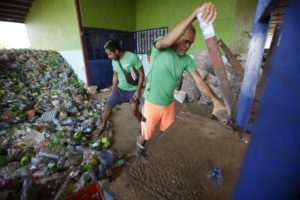 Located on the outskirts of Panama City, it is a complex with two separate prisons that houses 3,750 inmates, although it was designed to house 1,200.

That overcrowding had been aggravated even more because the inmates had to share the space with tons of garbage.

“They were calling this prison the antechamber to hell. They took out four guys each year with tuberculosis in my wing,” said Jose Angel Castillo, a long-time inmate.

The inadequate state-run trash collection system is not just a problem in Panama’s prisons. The United Nations estimates that in Latin America only 10 percent of the trash is recycled and some 35,000 tons of garbage is not collected each day, especially in poor areas.

“This prison is a reflection of what the country is. We Panamanians are pigs,” said an imprisoned gangmember who asked that his name not be used.