Nogales, Arizona, Mar 26 (EFE).- The razor wire that President Donald Trump ordered placed along the US border with Mexico has become a tourist attraction, drawing scores curious people eager to take a look at the barrier.
While a Border Patrol agent mans the booth at the Morley Gate port of entry, a group of tourists poses for photos with razor wire as the backdrop.


On the other side of the street, David Palomino and his wife, Jennifer, who are from California, are driving slowly by the area, trying to get a look at the razor wire strung along the border by soldiers to prevent illegal immigrants from crossing. 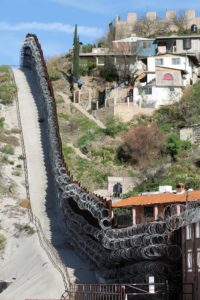 Palomino told EFE that like many others visiting the area, he and his wife watched a report on the news about the razor wire being placed along the border and wanted to get a firsthand look in this twin border city, located across the international boundary from Nogales, Mexico.


“I don’t know what this is helping to prevent, I think it’s a waste of money that could be used for something else,” Palomino said, referring to the razor wire that the government ordered placed along the border to improve national security and which local media outlets said was being stolen by Mexicans who then used it to secure their own properties.


Palomino and his wife stopped to discuss the differences between the American Nogales and the Mexican Nogales; the border barriers; the strong Border Patrol presence; and the tough task facing anyone hoping to jump the border wall without being detected.


While the couple looked at the razor wire, two Border Patrol units drove by in what has become part of the daily routine of residents and visitors.


What is new along the border is the military deployment aimed at stopping a rising number of migrants from crossing the border.


In February, more than 76,000 migrants were detained after making illegal crossings, the highest number in 12 years.


Residents on the US side of the border acknowledge that the razor wire, which can ensnare and cut anyone trying to cross it, has drawn curious visitors from across the US and abroad.


“This has become a big attraction. Unfortunately, this bit of bad news has been good for the city because we have more visitors and calls to the Tourism Office,” Olivia Ainza, president of the Nogales Chamber of Commerce, told EFE.


“The people who are coming are not people who stay, they pass through, eat at our restaurants, buy gasoline. For us, this is very good,” Ainza said, noting the “very good numbers” of visitors.


The Nogales-Santa Cruz County tourist office has received numerous calls and visits from people interested in the wall, which Trump vowed to build to deal with illegal immigration during the 2016 presidential campaign but remains mostly in the blueprint stage due to lack of funding and opposition from congressional Democrats.


The number of tourists visiting the border area, according to the Nogales-Santa Cruz County Visitor Center, rose more than 50 percent in January, compared to the same month in 2018.


Visitor numbers also rose in February and the trend is expected to continue this month, tourism officials said.


Nogales Mayor Arturo Garino, for his part, has been fighting with the federal government, demanding that Washington remove the razor wire completely or at least from downtown, where it poses a danger to residents.


“The wire was put in from above to the ground and is dangerous for children. We’ve sent letters to the senators from Arizona and congressmen asking that the wire be removed,” Garino told EFE.