Havana, Mar 31 (EFE).- After 17 years of work, Cuba and the US-based Finca Vigia Foundation have taken another step toward preserving Ernest Hemingway’s legacy with the inauguration this weekend of a modern center for conserving the vast collection of documents at the legendary writer’s home outside Havana.


The Finca Vigia restoration center, which was built with materials and assistance from the US, is equipped with a laboratory for conserving documents and other materials, and a vault for protecting the collection of documents belonging to the Nobel laureate. 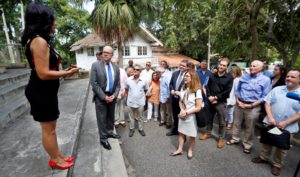 The non-profit foundation had to contend with restrictions related to the more than 60-year-old US economic embargo against Cuba, but it finally succeeded in sending five containers filled with equipment and materials to the island.


Finca Vigia Foundation executive director Mary Jo Adams said during Saturday’s inauguration of the center that the building was an example of what people can accomplish when they work together.


The project was completed in two-and-a-half years, thanks to donations from American Express; AT&T; Caterpillar; the Ford Foundation; the family of Frank and Jenny Phillips, the granddaughter of Hemingway’s editor, Max Perkins; and people from almost every US state, Adams said.


The Finca Vigia Foundation executive director said Hemingway came up with the ideas for some of his most important works in Cuba.


Adams said the first cooperation agreement between the Cuban National Heritage Council and the foundation was signed in 2002, opening the way for what has become a productive relationship that resulted in the restoration of the property’s main building and other structures, as well as the Pilar, the fishing boat owned by Hemingway.


The legendary novelist, popularly known as “Papa” among Cubans, is still beloved on the island, especially in Havana, where he was known for frequenting the Floridita and Bodeguita del Medio bars. 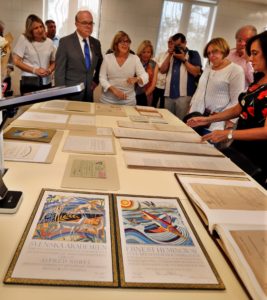 He was at Finca Vigia when he received word that he had won the 1954 Nobel Prize in Literature.


The novelist dedicated the prize to the Cuban people and left it as an offering at the Shrine of Our Lady of Charity, the island’s patroness, in El Cobre, a town some 20 kilometers (12.5 miles) west of Santiago.


Hemingway’s widow, Mary Welsh, donated Finca Vigia to the Cuban government to fulfill the writer’s last wish after he committed suicide on July 2, 1961, in Idaho.


The Cuban government operated the property as the Casa Museo Ernest Hemingway and conserved the more than 22,000 personal items at the property.


In addition to having a draft of “The Old Man and the Sea” in its collection, the museum has a draft with dialogue related to World War II that Hemingway planned to use in one of his stories.


Also in the collection is an epilogue that was rejected for his classic of the Spanish Civil War, “For Whom the Bells Toll,” as well as papers that provide insights into the writer’s personal life.


Finca Vigia draws thousands of visitors annually, many of them Americans interested in getting a firsthand look at Hemingway’s home in Cuba.