“We need (the government) to at least deliver the milk that it promised and if not, have private companies complement those deliveries to provide a little relief…from the dramatic situation that millions of families in our country are going through,” Barrios de Pie’s Silvia Saravia told EFE during a protest in front of a Buenos Aires supermarket. 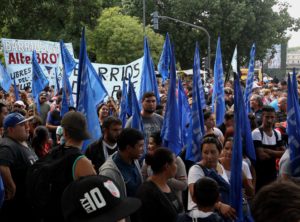 But the donations were 20,000 kgs. (44,052 lbs.) smaller than usual in the months of December and March, while the ministry delivered no milk at all in February, Saravia said.

She acknowledged that their continuing demands will be mere “stopgap measures” until the government makes structural changes to stop the poverty crisis suffered by 32 percent of Argentines, as the Indec statistics office said in a report released last week.

The Argentine economy has an economic model that prioritizes exporting food over ensuring “the proper nutrition for its population,” she said.
Over the past year, the cost of food staples soared by 60 percent while overall inflation was 47.6 percent, according to figures of the Institute of Civic, Economic and Social Research.

“Food prices increase much more than the inflation rate would indicate, which means much greater harm is done to families that must use practically all their income to put food on the table,” Saravia said. 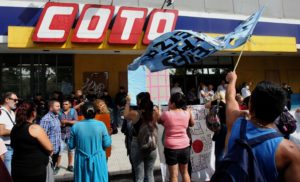 Carlos Sanchez, father of four, told EFE that “it’s terrible” having to choose between buying medicines or food.

He said “there’s a lot of difference” between the situation today and what it was like four years ago – a carton of milk cost 15 pesos (35 cents) then compared with 50 pesos ($1.20) now.

“For adults, coming to a soup kitchen is embarrassing, very frustrating, especially for the men,” she said, adding that retirees “use a large part of their income to buy medicines and they just don’t have enough to buy food.”

Just under 8 percent of the Argentine population suffered frequent hunger in 2018, according to a study by the Argentine Catholic University.