Mexico City, Apr 1 (EFE).- “They don’t have to kill us to deter us,” said Yohali Resendiz, a Mexican journalist who – despite being protected by the state – lives in fear when she sees that protection protocols are usually implemented only after it’s too late.


There are currently 498 human rights defenders and 292 journalists in the Mexican government’s protection program.


And even President Andres Manuel Lopez Obrador’s administration has acknowledged shortcomings in the program.


“We are analyzing different tools that allow us to identify risk situations, to serve people even though they are not part of the program,” Human Rights Undersecretary Alejandro Encinas said last Monday.


At least seven journalists have been killed since the leftist Lopez Obrador took office on Dec. 1. 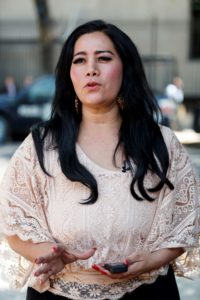 Resendiz was investigating a case of child sexual abuse in 2016 when suddenly she began receiving death threats on social media.
At the same time, personal details about her life were made public and someone broke into her vehicle to leave a note that read “You are going to die.”


It was then that she agreed to receive protection from the government, starting with being equipped with a so-called “panic button” device which sends out an alert with her current location when pressed, in addition to a direct communication link to security personnel.


At the beginning of the process, officials examined her home for possible ways that security could be improved, but that was of little use since six weeks ago someone managed to break into her room through the roof while three members of her family were inside the “secured” home.


Although officials did come to her house after she reported the incident, Resendiz has not heard back from the authorities since then.
Frustrated with her current situation and the lack of response from the government, she complained about the system failures that have put her life at risk and the “very serious” fact that she has been dropped from the program after going for six months without any reported incidents.


“At the beginning, I had access to a vehicle that allowed (police) to know where I was 24 hours a day. You lose your privacy but in the end, you accept that to avoid getting into a more serious situation,” she said.


Resendiz “at least” wants the government to open up the program to teach all journalists in Mexico how to take care of themselves.


She argues that journalists and activists should not have to experience risky situations to get put into the protection program, given that in many situations authorities act only when it’s already too late or the victims have experienced situations that “change your life radically.”


In many cases, the death threats and other intimidating tactics accomplish the perpetrators’ purpose: to hamper journalists and human rights activists in doing their jobs.


Resendiz, for example, stopped writing for a few months about issues related to child sexual abuse and now every time she writes about a topic she thinks about the consequences that her reporting could have for her safety and is always reviewing whether any of her personal data could have been leaked onto the Web.